“The former Cross Cultural Center had been branded as a space mostly benefitting our Black and Brown students; however, its charge is bigger and more complex,” said Amber Johnson, Ph.D., (A&S ’01, Grad A&S ’02), interim vice president for diversity and community engagement. “The name change pushes us to think broadly about what culture is, who has a cultural identity and how we prepare all students to be the best global citizens they can be.” 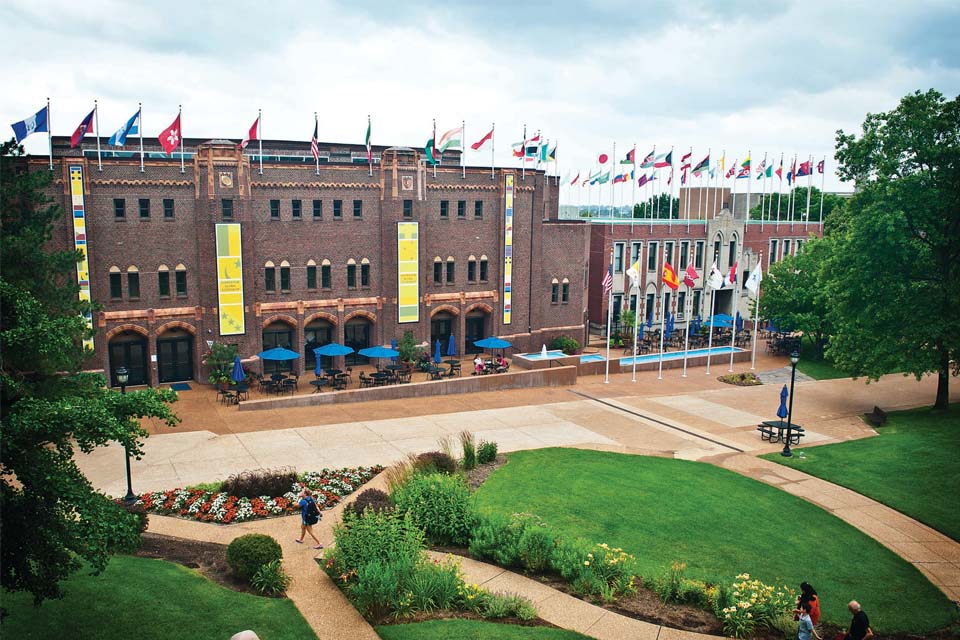 The name change also captures the spirit of major gifts from Trustee Chang Soo Huh (’77) and AT&T made to the University in 2013 to support global education initiatives at SLU. Additionally, it brings attention to the physical space of the CGC, which Johnson said is not utilized as often as it can be.

“Our goal is to increase foot traffic and bolster programming,” Johnson said.

In June, Johnson was appointed associate provost in the former Office of Diversity and Community Engagement, founded by the late Jonathan Smith, Ph.D., SLU’s first chief diversity officer. In August after Smith’s passing, Johnson took the helm in theirs current role among other division changes.

DICE formally launched during the 2021 Occupy SLU Week, Oct. 8-15. Occupy SLU was a peaceful occupation at the campus clock tower across six days in October 2014, following the officer-involved shootings of two African American young men: Michael Brown Jr. in Ferguson, Missouri, and VonDerrit Myers Jr., the son of a long-time staff member, VonDerrit Myers Sr., in the nearby Shaw neighborhood of St. Louis.

Occupy SLU ended with the adoption of the Clock Tower Accords, a 13-point agreement to actively strengthen diversity, equity and inclusion (DEI) on campus. Each year in October, the University sponsors programming designed to illuminate the shared values of empathy, dignity, and trust that were foundational to achieving a peaceful and constructive resolution.

It was in 2014 that Richard Marks, Ed.D., joined SLU as assistant director of residence education in the Department of Housing and Residence Life.

“The University commemorates Occupy SLU because it brought attention to the tensions and injustices in our world and at our institution,” said Marks who now serves as director of the CCCGC. “It is a reminder of how SLU is accountable to the mission and its stakeholders, especially those who are marginalized and underrepresented.”

At the CCCGC, Marks said members of the SLU community learn to think critically about social injustices and how to eliminate barriers of oppression. He added that he and staff member Luella Loseille, (A&S ’17, Grad ’19) assistant director of diversity and inclusion, support the University as DEI consultants in a myriad of ways.

This includes promoting and maintaining an inclusive environment of mutual respect for people of all backgrounds, cultures and identities. They accomplish this goal by collaborating with academic and administrative departments through DEI workshops and multicultural education, student organization advising and mentoring, as well as retention and support services that include LGBTQIA resources.

Each November, CCCGC hosts Diversity Awareness Month which fosters awareness and respect for social, cultural, religious and ideological diversity on campus. Programs and initiatives include the launch of the Audre Lorde Scholars Program, which promotes academic excellence and mentorship among students who identify as women of color at SLU. The program is the sibling component of the University’s African American Male Scholars Initiative (AAMS), which aids in the retention and graduation of African American male students.

“Within the next year, the CCCGC wants to increase our DEI awareness to include our international partners,” Marks said. “With this change, the campus can see that DEI is not just a local or national effort but a global effort.”

This story is part of a series commemorating Occupy SLU Week. Next, learn why the Center for Social Action was rebranded.