Andrés Gallegos, J.D. (Law ’93), has been tabbed to deliver the address at Saint Louis University’s May 2022 Commencement Ceremony. 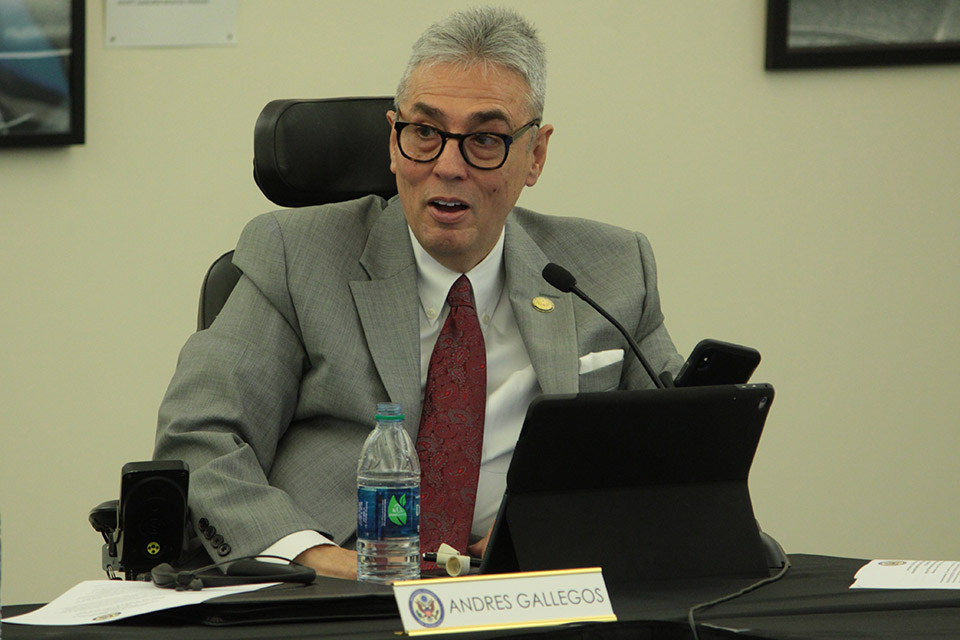 Andrés Gallegos, J.D. at a 2019 meeting of the National Council on Disability in Chicago. Photo submitted.

Gallegos is the chair of the National Council on Disability – the non-partisan federal agency that advises the president, Congress, and federal agencies on policy matters affecting persons with disabilities in the United States and its territories. A member of the council since 2018, he was appointed as the council’s chair on Jan 20, 2021 — shortly after Joe Biden was sworn in as the 46th president.

A Chicago native and U.S. Air Force veteran, Gallegos has advocated for disability rights for much of his career. After graduating from SLU Law, Gallegos was practicing international trade law when a car accident left him with irreparable damage to his spinal cord.

After experiencing discrimination because of being in a wheelchair, Gallegos realized that it likely was happening to others. So, despite not previously concentrating on disability rights, he refocused his career on helping those like him who did not have a voice.

Gallegos established a national disability rights practice in Chicago at Robbins DiMonte, Ltd. He continues in that role as a shareholder, concentrating on disability rights and health care law. Through workshops and webinars, Gallegos and his team educate persons with disabilities and their advocates about their legal rights to access health care. He leads the firm’s collaborative efforts with hospitals, health care systems, dental, and other providers to ensure persons across all categories of disabilities receive the opportunity to benefit from their facilities and services.

Gallegos serves on the boards of directors of national and Chicago-based nonprofit cross-disability advocacy organizations, namely the American Association on Health and Disability, Disability Lead and Access Living of Metropolitan Chicago.

In addition to delivering the commencement address, Gallegos will join four others in receiving honorary degrees. 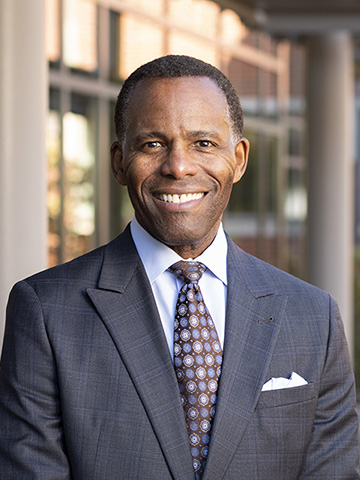 Isiaah Crawford, Ph.D. (A&S ’82) is being recognized with an honorary degree for his commitment to creating inclusive learning environments for the next generation of visionary leaders and life-long learners.

Crawford grew up in St. Louis and became the first in the family to graduate from college after he earned his bachelor’s degree from Saint Louis University. He earned masters and doctoral degrees in clinical psychology from DePaul University in Chicago.

He moved to Loyola University Chicago, where he joined the psychology department faculty as an assistant professor, earned tenure, and eventually was promoted to the rank of professor. Crawford served as dean of Loyola’s College of Arts and Sciences while maintaining a private psychotherapy practice.

Crawford left the Midwest to serve as provost and chief academic officer at another Jesuit university, Seattle University. He oversaw the university’s schools, colleges, libraries, enrollment, research, and global engagement activities during his eight years there.

In 2016, Crawford was named president of the University of Puget Sound in Tacoma,  Washington. Since joining Puget Sound, Crawford has promoted curricular innovation that has led to the development of an array of new academic programs; increased access for all students to high-impact experiential learning; and expanded community engagement. 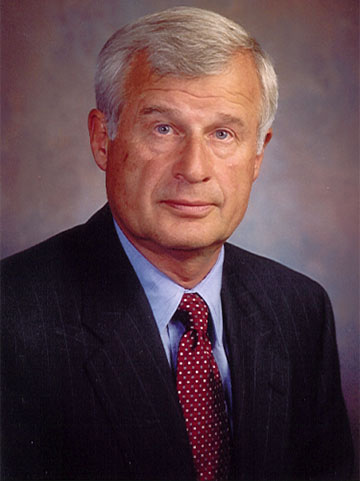 Patrick P. Lee (Parks ’59) is receiving an honorary degree for his commitment to sharing his success with others and supporting those who care for those with mental health issues.

Lee earned his degree in aerospace engineering from Saint Louis University Parks College of Engineering, Aviation and Technology in 1959.

In 1967, he founded Enidine Incorporated, which eventually became one of the country's premier manufacturers of industrial and aerospace shock absorption and vibration isolation products. He later acquired other companies to create International Motion Control (IMC), a worldwide conglomerate of manufacturing firms.

In 2007, when he decided to sell IMC, Lee directed part of the proceeds to establish the Patrick P. Lee Foundation. This private charitable foundation provides funding for initiatives to advance education and improve the lives of individuals and families affected by mental illness.

The Patrick P. Lee Foundation has given millions of dollars in scholarships to students pursuing careers in manufacturing and other engineering and technical fields. The students graduate with minimal debt and are well-positioned to enter the workforce and contribute to the economy. Since 2010, the foundation has awarded 202 engineering and tech scholarships – 68 of which have been awarded to SLU students. 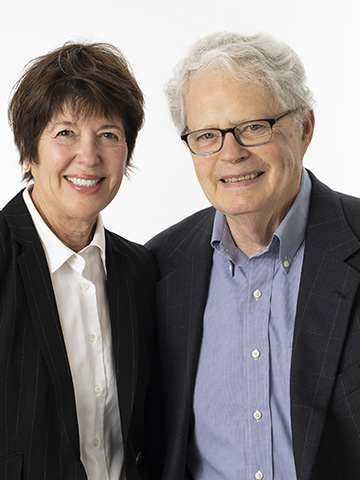 Joan and John Vatterott are receiving honorary degrees for their commitment to social justice and helping underserved students find their path through education. John Vatterott is an Arts of Sciences Class of 1965 graduate.

In 1969, John Vatterott established Vatterott College — a network of trade schools stretching across the Midwest. The education educational network was sold in 2003. In retirement, John and Joan Vatterott put their energies full time into charitable work through the Joan and John Vatterott Foundation. They have provided funding to numerous non-profit organizations during the last two decades, primarily in the St. Louis area.

In 2005, the Vatterotts and a group of other concerned St. Louisans founded Access Academies. The enterprise uses enrichment programs and scholarships to propel historically underserved middle school students through high school and college.

Access serves more than 500 students in the metro area. Ninety-eight percent of academy students graduate from high school on time. Ninety-six percent are accepted to colleges, universities, or other post-secondary institutions.

In 2020, SLU integrated Access Academies into the Saint Louis University School of Education to strengthen the University’s connection with students in local Catholic schools and their surrounding neighborhoods. The integration also allows Access Academies to tap into the school’s expertise, research, and SLU’s Billiken Teacher Corps to enhance programming further.

The SLU-Madrid commencement ceremony will kick off the graduation season for SLU. The ceremony will be Friday, May 13, at noon local time.

Jessie J. Knight, Jr., will serve as the commencement speaker.

After a long and distinguished career in both the public and private sectors, Knight (A&S ’72) currently serves as the managing director at Knight Angels Consulting. This philanthropic organization supports innovative community projects led by minority, women and military veteran leaders.

Before his retirement, he served as executive vice president of external affairs for Sempra Energy, a Fortune 500 company. Before joining Sempra Energy in 2006, Knight served for seven years as president and chief executive officer of the San Diego Regional Chamber of Commerce, the largest business organization in California, representing 2,800 companies with more than 400,000 employees.

In 1993, Knight was appointed commissioner for the California Public Utilities Commission, responsible for regulatory oversight of the state’s energy, telecommunications, railroad, transportation, and water industries. Before this appointment, he served as executive vice president of the San Francisco Chamber of Commerce, responsible for international operations, economic development, and business development for more than 2,100 businesses.

Knight serves on various boards, including the Alaska Air Group, the San Diego Padres baseball club, and is a life member of the Council on Foreign Relations in New York.