Ajay Jain, M.D., professor of pediatrics, pharmacology, and physiology, received a highly coveted NIH R21 grant for $428,020. This round of funding compliments Jain’s recent NIH R01 grant for $1,893,750. With these two grants, Jain is focusing on comprehensively assessing gut-systemic signaling and the role of gut microbiota in preventing injury in SBS. 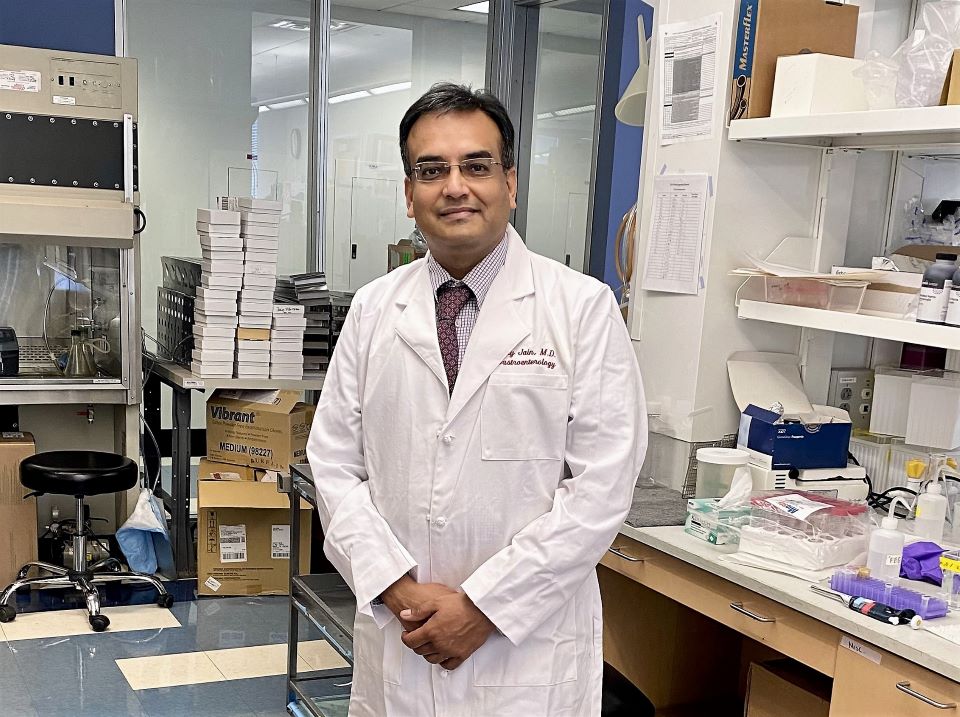 Tens of thousands of patients worldwide require continuous TPN for survival. Unfortunately, a large portion of SBS patients are children, infants and newborn babies. Despite the lifesaving benefits of this widely used therapy, patients with SBS may have significant side effects including Intestinal Failure Associated Liver Disease (IFALD). IFALD leads to progressive liver failure as well as gut injury, permeability changes, and atrophy, Jain said.

“There are no established treatment strategies for SBS, and patients suffer extensive morbidity and need intensive medical management, with many patients dying or requiring a multi-visceral transplant for survival,” he said. “Thus, this remains a major research focus in gastroenterology and hepatology.

“There has been intense research in this area throughout the world and while several ideas have been proposed we wanted to ‘think outside the box.’”

Jain hopes to leverage results from his lab’s earlier studies that highlight the role of altered gut-derived signals as a major driver of injury in SBS. This current round of funding will explore how gut microbes influence the disease progression in SBS.

Each person carries over 100 trillion microbes. In terms of genetic material, the microbiome genome is a hundred-fold higher than that of its host, which means that from a genetic perspective each of us is only 1% human and 99% bacteria.

"Our goal is to understand the impact of these bugs, isolate the good organisms for treatment, and restore key signaling pathways, which could bring a paradigm change in the management and care of some of our most vulnerable and precious patients,” Jain said.

This NIH grant will also evaluate the impact of bacterial breakdown products and novel signaling molecules that Jain and his lab have been studying in preclinical models, testing their efficacy in mitigating the multisystem injury in SBS. He will explore new microbial driven signaling pathways that would open strategic areas of therapeutic targeting.

Jain will also use organoid approaches, which is a highly specialized technique where organs are grown in the lab to gain further insights.

“We believe that we are on the verge of creating sustainable options for our sickest patients with SBS. Our cutting-edge translational research could prove transformative not only as a treatment but advance science in unlocking the mysteries of gut microbes and gut to systemic signaling. This would have far-reaching positive consequences to the field,” Jain said.

This prestigious NIH grant builds on previous research Jain has conducted for more than a decade and a half.