Bruemmer Remembered as ‘the Billiken We All Aspire to Be’

Friends, family and other mourners filled the church and viewed the livestream for the memorial Mass of Mary A. Bruemmer, a beloved figure at Saint Louis University who served SLU for 65 years as a longtime administrator and full-time volunteer. 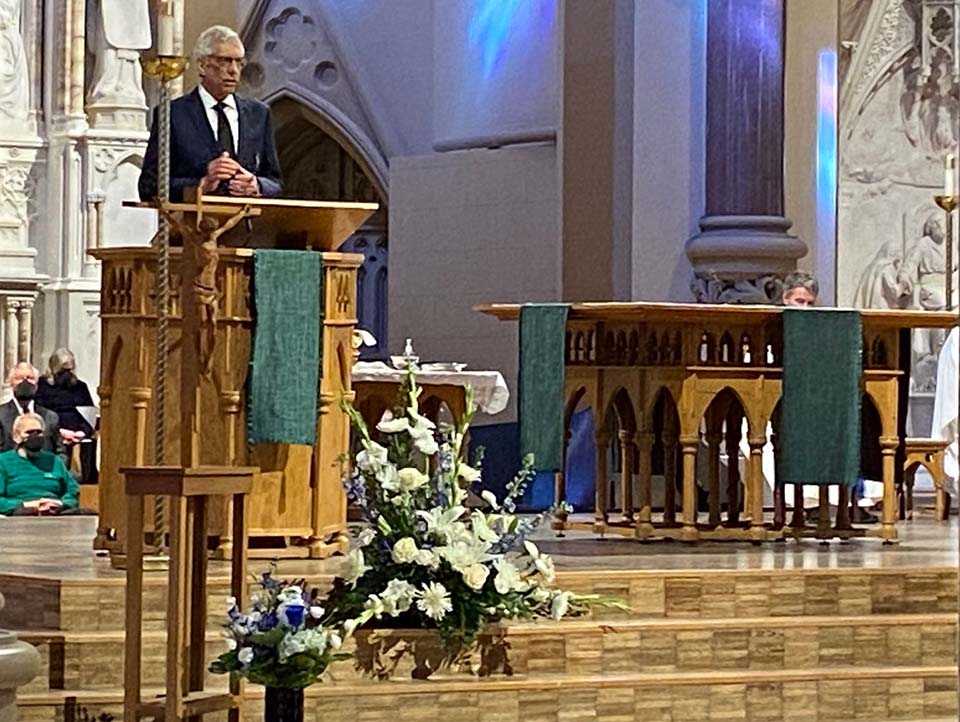 Bruemmer died Dec. 23, 2021. Saturday would have been her 102nd birthday. During the service, she was remembered as a strong leader who cared deeply about SLU.

“Among the tens of thousands of Billikens shaping the world, there was one who stood above the rest,” President Fred P. Pestello, Ph.D., said. “One who was unparalleled in her devotion to SLU. One whose very name evokes universal reverence. Mary Bruemmer.”

Bruemmer was born in Madison, Illinois, to Ignatius G. and Adele Bruemmer. After graduating from Madison High School, she enrolled at SLU in 1938 at a time when fewer than 5% of SLU’s students were female. She later became the first female editor of SLU’s student newspaper and yearbook.

“Try to imagine what the world, and this university, were like for young women at that time,” Pestello said. “This detail says a lot: Earning straight A’s, Mary double majored in history and English. But she entered and graduated from the School of Education and Social Sciences, because women were not permitted to register in the College of Arts and Sciences. Hard to fathom in 2022.”

Bruemmer earned her bachelor's degree SLU in 1942. She returned to SLU in 1956 as the director of the University’s first official residence hall for women, Marguerite Hall. In 1960, she became director of women’s housing at the University. She also earned a master’s degree in education from SLU.

In 1967, she became the dean of women. Then, in 1972, she became the dean of students after the University created a new position that combined her former role as dean of women with the positions of dean of men and dean of student affairs. In that same year, she led efforts to open Oriflamme to women, and she would go on to advise the student orientation organization for nearly 20 years.

Pestello shared a story about one of the first times he met Bruemmer and saw up close her relationship with Oriflamme.

“When we arrived at the Wool Ballroom, the reception we received from those students was something to behold — the applause, the shouts, the joy,” he said. “It was all for my companion, who was old enough to be their great grandmother. The members of Oriflamme adored her, and she adored them.”

Bruemmer served as dean of students until 1985, when she moved to the development division to support alumni engagement and fundraising. She officially retired from the University in 1990, but continued to come to SLU daily for the next 26 years as a full-time volunteer for the Women's Commission, a group she founded, as well as the Women's Council and the Jesuit honor society Alpha Sigma Nu. She retired from SLU for a second time in 2016.

Bruemmer’s long tenure at SLU meant she met, and made an impact, on a lot of people.

“I knew Mary my entire time at college church,” said Daniel White, S.J., St. Francis Xavier College Church Pastor. “She was one of the first people I ever met when I came here. She was always so filled with joy. So filled with care. So classy. She loved this place, this campus, this University, this parish.”

During his eulogy, Pestello said that when he started at SLU in 2014, he began to get fully immersed in the University, meeting new people and learning about others. One name stuck out in his mind — Bruemmer’s.

“When a person joins an organization as a new president, the number of names one hears and people one meets is nearly overwhelming,” he said. “I could easily detect, however, that when people spoke about this Mary person it was different. When they spoke about her, it was always with admiration. And when I met her, I understood.”

During her tenure at SLU, Bruemmer earned a number of awards and accolades. In 1977, she was named SLU’s first Woman of the Year. Three years later, the Student Government Association created the Mary A. Bruemmer Award to recognize a member of the SLU community who made a lasting impact and exemplified dedication to advancing the student experience.

In 1990, Miss Bruemmer received the inaugural Fleur de Lis Award from SLU, and 10 years later, the University celebrated her many contributions with an honorary doctorate of humanities. A devout Catholic, Miss Bruemmer was awarded a papal knighthood in 2016, becoming Dame Commander of the Order of Saint Sylvester, Pope and Martyr.

“As nice as those awards were, they did not mean as much to her as SLU students, her friends, and her colleagues,” Pestello said. “And she understood what she most needed to do to support them. Mary was unceasing in her efforts to make life even better for those who came after her.”

Pestello noted that Bruemmer was devoted to SLU and always had the University on her mind. He shared a story of when, a few years ago, a doctor asked Bruemmer if she knew what year it was. Bruemmer answered correctly. When the doctor asked if she knew who the president was, she quickly responded that it was Fred Pestello.

“Despite the formidable obstacles Mary faced during her SLU career, many because of her gender, she never expressed bitterness about the challenges she endured,” he said. “Mary only spoke about what a wonderful place SLU is and what an amazing university it was on its way to becoming. Indeed, with her unceasing work, and her incredible pace — Mary propelled that process of becoming.

“She is the Billiken we all aspire to be. One whose efforts pushed SLU to become the university it ought to be. Since the fall of 1938 Mary never fell out of love with this University, its students, staff, faculty, and alumni. She showed it every day of her long life, and she remained a transformative force in the trajectory of Saint Louis University right up to the end. Her transformative work continues even now, through all of us who knew and loved her.”