When asked about a recent award he received, Saint Louis University student Seyoon Choi deflects attention away from himself.

“I hate talking about me,” said Choi who is being extolled statewide as a leader in disability inclusion. “I am humbled by the recognition.”

Choi, a junior majoring in social work, has been selected for the Governor's Council on Disability (GCD) 2021 Youth Leadership Award. GCD promotes full participation and inclusion of the nearly 1 million Missourians with disabilities in all aspects of community life by educating citizens, businesses, schools, universities, and others of their rights and responsibilities under the Americans with Disabilities Act. 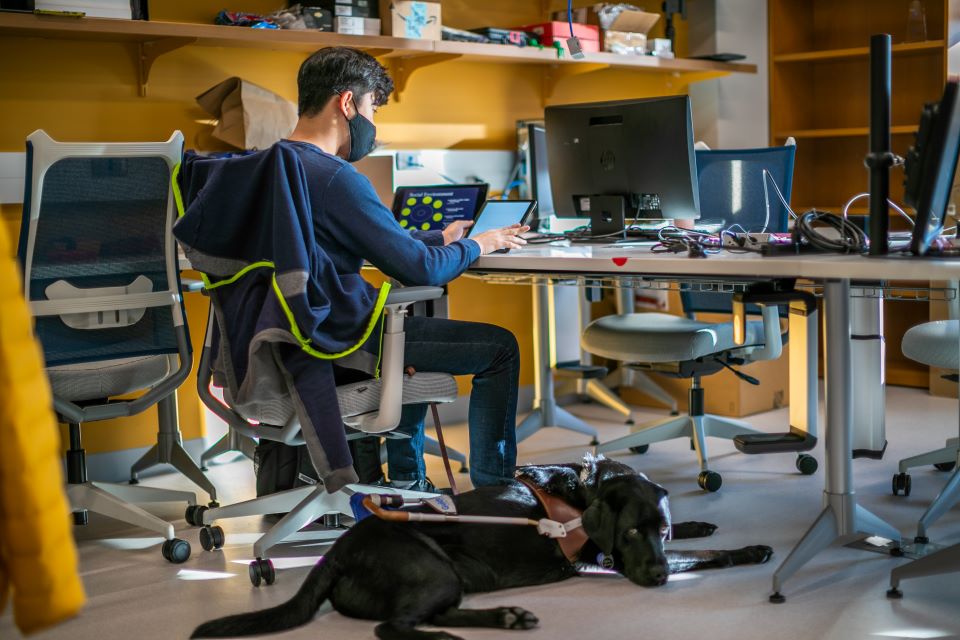 Seyoon Choi is pictured here with his service dog, Kaplan, in SLU's CHROME Lab where he works as a research assistant. Photo by Garrett Canducci.

The annual Youth Leadership Award recognizes an outstanding Missouri youth aged 16-26 with a disability that has demonstrated exemplary leadership by making a difference in their community. Choi, who is visually impaired, will receive the award at the Missouri Assistive Technology’s Power Up Assistive Technology Conference & Expo in Blue Springs, Missouri, on April 5, 2022. Choi said Lynn Berger, a former and now retired high school teacher with the Special School District of St. Louis County, nominated him for the award.

“She always told me I was one of her exceptional students and said she learned as much from me as I learned from her,” said Choi of Berger.

Choi, who is minoring in computer science, is excited to attend the conference for the first time and learn about the latest technological innovations. Choi works as a research assistant in SLU's Collaborative Haptics, Robotics, and Mechatronics Lab, which promotes better interaction between people and machines. Currently, he is collaborating with SLU graduate student Colton Doherty to develop an adapted hockey puck with the blind and visually impaired.

Choi and his service dog, Kaplan, will travel by train from Springfield, Missouri, where he will attend the National Federation of the Blind (NFB) of Missouri’s 60th Annual State Convention held March 31 through April 3, 2022. Choi serves as president of the Missouri Association of Blind Students, a division of the NFB of Missouri. He will present, “Students in Action in the Federation” at the state convention on April 2.

Choi serves as co-chair of the Outreach Committee of the National Association of Blind Students (NABS) and produces its podcast, “NABS NOW.” He creates educational tutorials on his YouTube channel, "Blind Insider.” Choi also works as a Blind Community Enrichment Associate for Lighthouse for the Blind - St. Louis’ Arts and Entertainment Accessibility program. In his role, he assists local museums and cultural venues in making their exhibits and attractions accessible and engaging for patrons who may be either blind or visually impaired.

His current role is a straight trajectory to accomplishing his long-term career goals. Choi will work toward a master’s degree in social work and announced his acceptance into the Accelerated program at SLU’s College for Public Health and Social Justice. He envisions himself working with city officials on reform policies to create more accessible communities.