The National Geospatial-Intelligence Agency's decision to build a 97-acre project site in St. Louis has led to a geoscience boom in the region. 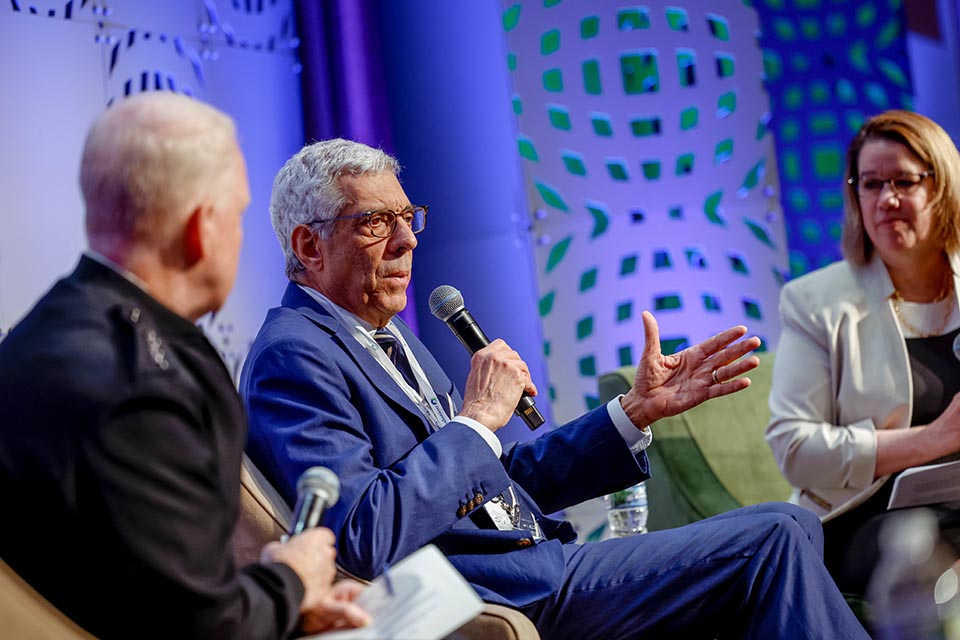 Speaking at the Geo-Resolution conference Wednesday morning on the SLU campus, Pestello said that’s no longer the case. Geospatial work is a big deal in St. Louis.

“We are seeing powerful collaborations which heretofore did not exist. At the same time, computers and computer science is developing and allowing us to tackle problems which were impossible to solve because of how complex they were just a few years ago,” Pestello said. “It’s been very impressive.”

Geo-Resolution is an annual conference hosted by the NGA and SLU. The conference encourages collaboration between government, academic and industry partners to foster geospatial technology innovation and applications, connect geospatial experts and students, and grow the geospatial ecosystem in the greater St. Louis region.

Pestello noted the growth of the geospatial ecosystem in St. Louis already is remarkable.

“What I’ve seen over my period of time here is the NGA going from something that was not really well known at all, certainly not on the radar screen of the leaders in the community or bi-state region to becoming absolutely central — a top priority for the region. St. Louis has gotten much more focused in the last several years across the community. In that focus, the priorities have been set and this is clearly a top priority.”

The new NGA facility is set to be finished in 2025 and opened in 2026, Vice Admiral Frank D. Whitworth, NGA director, said. Whitworth noted that while the facility itself gets a lot of attention, it’s the people inside who make the difference.

Whitworth said St. Louis has a vision with geospatial work — a vision that other places should look to copy. Part of that vision is training the next generation of geospatial workers. That is a task SLU has readily taken on, Pestello said.

“Here on campus, we decided that we geoscience a top priority at Saint Louis University,” Pestello said. “We began internally working to assemble resources and commit to that. Along the way, Andy Taylor made this incredible investment to form the Taylor Geospatial Institute. We now have a consortium of eight leading research institutions in the bi-state area collaborating with incredible synergy bringing in different expertise to work together on similar problems to advance geoscience.”

Led by Saint Louis University, the Taylor Geospatial Institute (TGI) is a first-of-its-kind institution that brings together eight leading research institutions to collaborate on research into geospatial technology. TGI was launched in April.

Although just a few months out from its launch, Whitworth praised the work and leadership coming out of TGI.

“As a military officer and, not to mention the leader of the NGA, I’m into leadership and I’m into standards,” he said. “The Taylor Geospatial Institute is the leader and setting the standards, not just for geospatial science, but frankly for other communities who may not have even thought of having a civic-academic-governmental relationship propelled by groups that could be competitors, but are instead collaborators. I think it’s becoming a beacon on the hill that is going to used in a lot of different places.”

Pestello said the emergence of TGI bodes well for the future. Pestello said his version of success would be “an acceleration of the momentum that already exists.”

“When you can bring together larger numbers of people, in this case, thousands of faculty and tens of thousands of students I think you’re just starting to see the beginning of the potential of this,” Pestello said.