“Seek out the opportunity to use the voices you have been given … there is no guarantee that you will have your voice tomorrow.”

New law alumna Sarah Tomlinson shared that message with her fellow graduates, their families, friends and the SLU community during Saint Louis University’s bicentennial year commencement on Saturday, May 19, at SLU’s Chaifetz Arena. 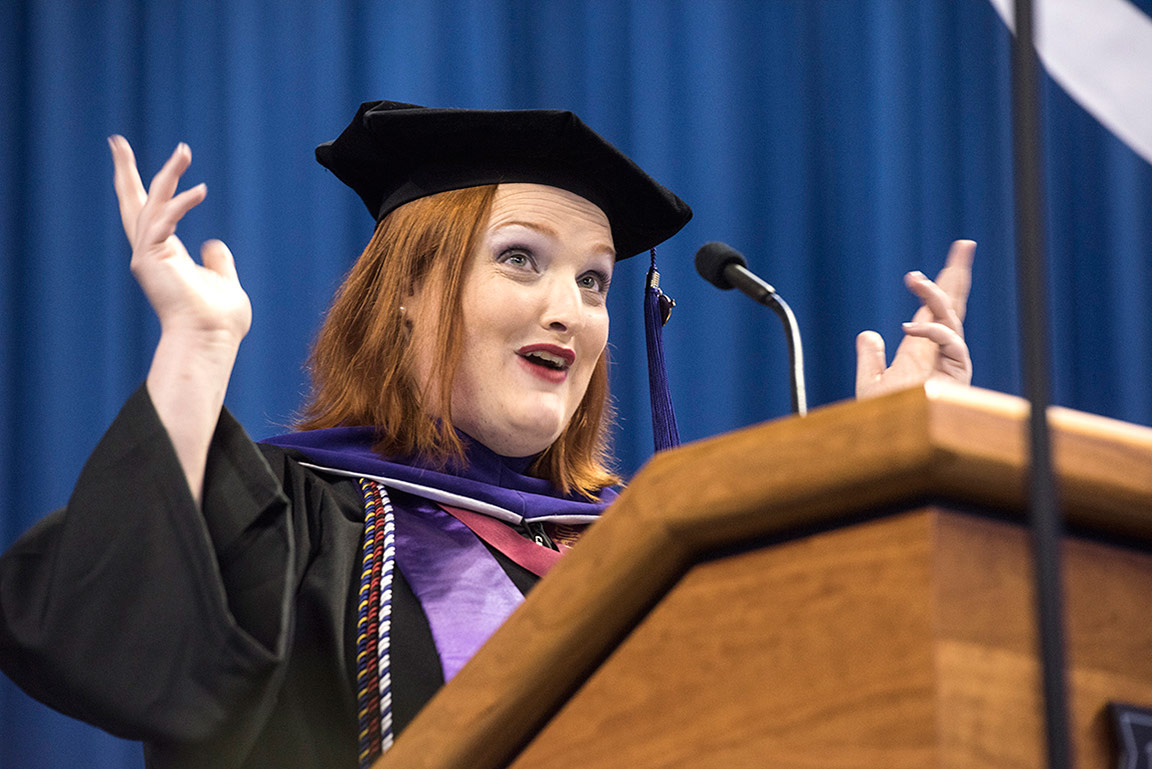 New law alumna Sarah Tomlinson speaks to the Class of 2018 about her SLU experiences. Photo by Steve Dolan

Tomlinson entered SLU’s School of Law unable to speak, a complication of the cancer treatment she was undergoing. She had received her diagnosis shortly before her first term of law school.

“It was an isolating experience that gave me an unbelievable perspective on what it means to not be heard,” she explained. “The Jesuit mission at SLU is about helping those without a voice to be heard, which initially, I didn’t fully understand. Each person today has the opportunity to use the lessons learned at SLU to give a voice to a cause.”

As Tomlinson finished her speech, the crowd of 5,997 gave her the event’s first standing ovation.

Ronald Mercier, S.J., provincial of the Jesuits' U.S. Central and Southern Province, echoed Tomlinson’s call to service and asked the new graduates to embrace a “holy boldness” as he delivered this year’s commencement address.

A former faculty member at SLU, Mercier was also the homilist for the University’s historic bicentennial Mass under the Gateway Arch in September. After coming to SLU in 2010, Mercier served as rector of Bellarmine House, a community of Jesuits in formation. He also took part in sacramental ministry at St. Francis Xavier College Church and at St. Mary’s Assumption Ukrainian Byzantine Catholic Church in addition to his teaching duties.

SLU has made that devotion its own, part of its Jesuit mission, and we see it in all who labor here. In a world too dominated by fear of the other and the divisions that promotes, a radical openness to others and the world represents a gift we all need.”

In current role as provincial, Mercier oversees 400 Jesuits and Jesuit institutions in the continental United States, Belize and Puerto Rico. He noted SLU’s commitment to serving others and the Jesuits’ pride in the University’s 200-Years-in-One-Year Service Challenge.

“Especially today given the challenges we face in the world, the cry for justice, we need to be bold, rather than to ‘play it safe,’ Mercier told the crowd. “So many systems in our nation and our world, whether in higher ed or economics, increasingly do not serve the needs of the most vulnerable.”

Billikens, he continued, are uniquely suited to meeting the world’s challenges, due to their devotion to God, dedication to the Jesuit mission and commitment to being women and men for others.

“SLU has made that devotion its own, part of its Jesuit mission, and we see it in all who labor here,” Mercier said. “In a world too dominated by fear of the other and the divisions that promotes, a radical openness to others and the world represents a gift we all need.”

University President Fred P. Pestello, Ph.D., welcomed the new graduates and their families on behalf of the SLU community, encouraging the newest the University’s newest graduates to be mindful of the symbolism of the Billiken mascot as they prepared to leave for the next stage of their life journeys.

“Your pride radiates throughout the arena and will soon reverberate within the communities in which you will serve,” he continued. “All of us feel your sense of accomplishment. We share it.”

Pestello asked those gathered to spend a moment remembering those who could not attend the ceremony, noting the empty chair wreathed in flowers on the stage nearby. He highlighted members of the SLU community who had passed away during the school year, including SLU criminologist Norm White, Ph.D., and student ambassador and Richard A. Chaifetz School of Business graduate Timothy Gruensfelder. 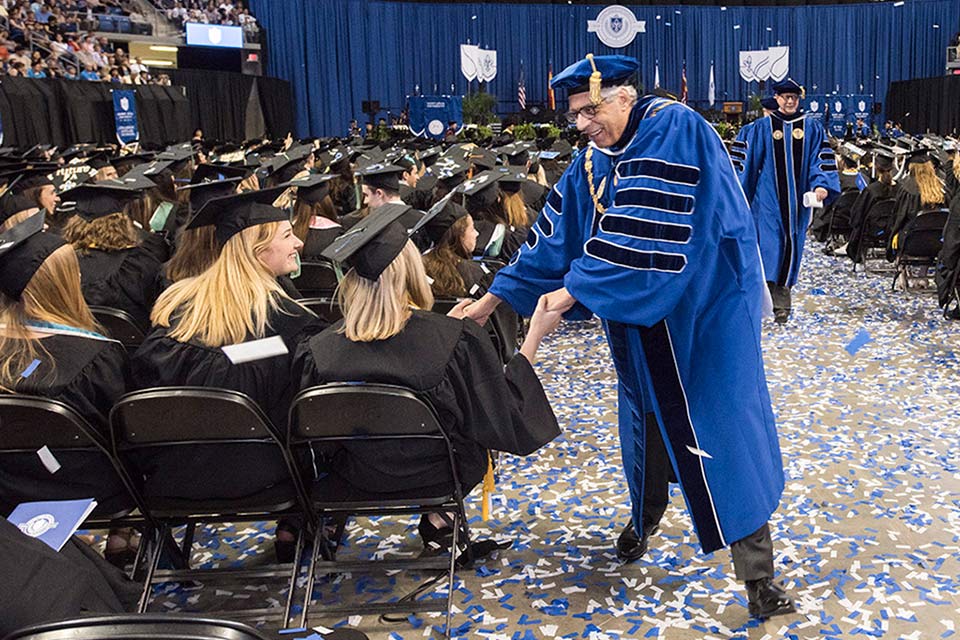 Clay was active in the St. Louis Civil Rights Movement before being elected to Congress in 1968. He served 16 terms and was a founding member of the Congressional Black Caucus and guided initiatives aimed at protecting workers, disadvantaged students and families.

Slay was the longest-serving mayor in the city’s history. His four terms saw billions of dollars invested in the city, expansion of the region’s MetroLink system, and the revitalization of downtown. His efforts are also credited with making St. Louis one of the fastest growing startup cities in the nation.

Mercier received an honorary Doctor of Divinity degree for his leadership and work with young Jesuits in formation.

In another nod to the University’s bicentennial, SLU also reintroduced its Varsity Song, which had not been performed at commencement since the 1960s. Aaron Johnson, D.M.A., assistant professor of music, adapted the song’s lyrics and arranged the music for the May 19 ceremony.

The song was written in 1909 by Alfred G. Robyn, a composer who traced his SLU roots back to his father, a musician and composer who taught at the University for several years. Paul L. Blakely, S.J., wrote the song’s original lyrics.

Commencement began with the traditional procession, with John Waide, University archivist emeritus and member of the Bicentennial Steering Committee, acting as mace bearer. The University Mastersingers led the crowd in the national anthem and Christopher Collins, S.J., assistant to the president for mission and identity, offered the invocation.

After each college and school’s graduates were recognized, Cheryl Archibald, chair of the board of director of Catholic Charities and pastoral assistant at St. Matthew the Apostle Catholic Church, gave the ceremony’s closing benediction.

With a blast of music, confetti, and streamers, those gathered in the arena raised their voices as the newest sons and daughters of SLU celebrated the beginning of their lives as SLU alumni. 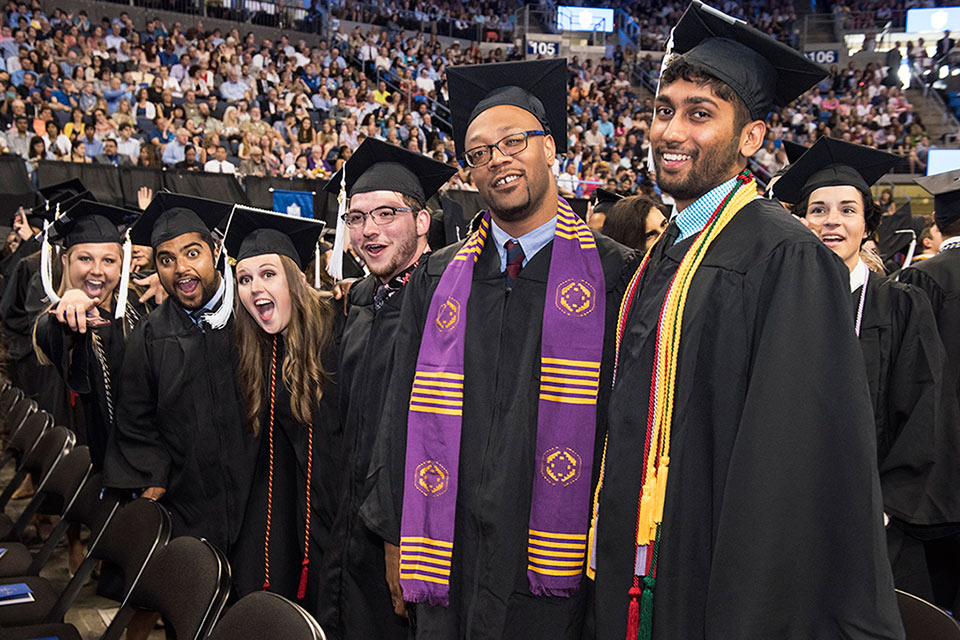 Members of the Class of 2018 pose for a photo on their big day. Photo by Steve Dolan

Students who graduated with honors