One year after it launched, Saint Louis University’s 200-Years-in-One service clock counted its last hour on Wednesday, Nov. 14. The clock stopped at 5 p.m. and the service hours will remain frozen on the clock at the corner of Grand and Lindell for all to see until the end of 2018. 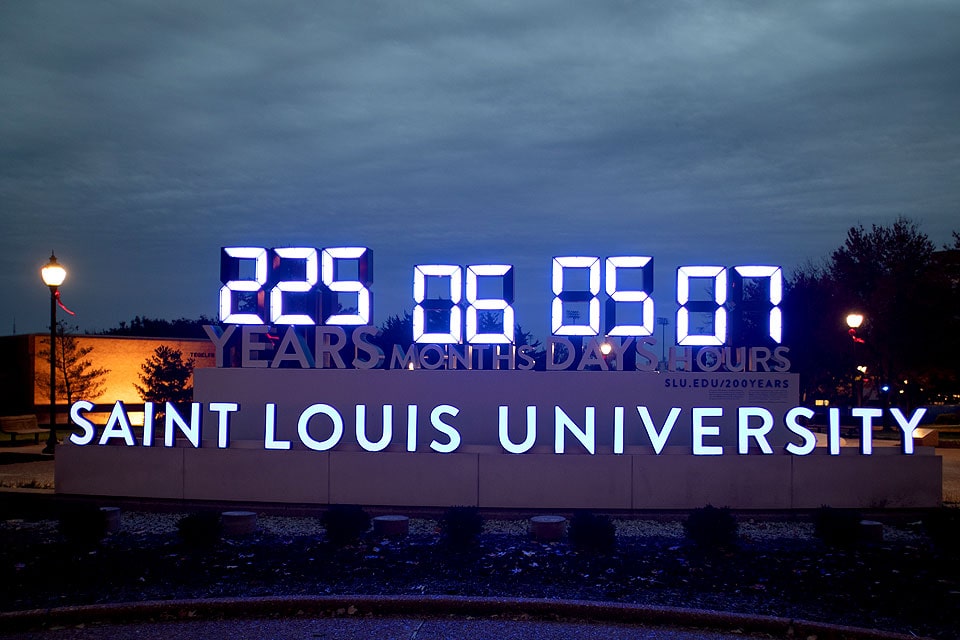 A service-focused Jesuit mission makes up SLU’s core. Founded in 1818, Saint Louis University has worked to alleviate ignorance, poverty, injustice and hunger and has extended compassionate care to the ill and the needy.

In August, the Princeton Review ranked SLU No. 1 in the nation as the university most engaged in community service. Later that month, all new students at SLU were introduced to the University’s culture of service at the first new student day of service, part of Fall Welcome.

The first hours on the service clock[BROKEN LINK] were entered in November 2017 by Emily Corey. Corey, then a junior in SLU’s College of Public Health and Social Justice, was the president of Campus Kitchen.

The service clock honored SLU’s bicentennial year by encouraging participation in a year-long commitment to service. Time spent by students, staff, faculty, alumni, parents and community members volunteering, mentoring and improving the world around them was logged through the 200-Years-in-One app or online.

In addition to volunteer hours entered by people linked to SLU, several landmark entities in the St. Louis region, including the Saint Louis Zoo and Missouri Botanical Gardens, and area non-profits including Haven House St. Louis and the Assistance League of St. Louis, added volunteer hours to the clock.