Saint Louis University’s 200-Years-in-One service clock reached its goal of 200 years or 1.7 million hours of service on Friday, Oct. 5. The milestone comes 5 weeks ahead of the clock’s termination date. 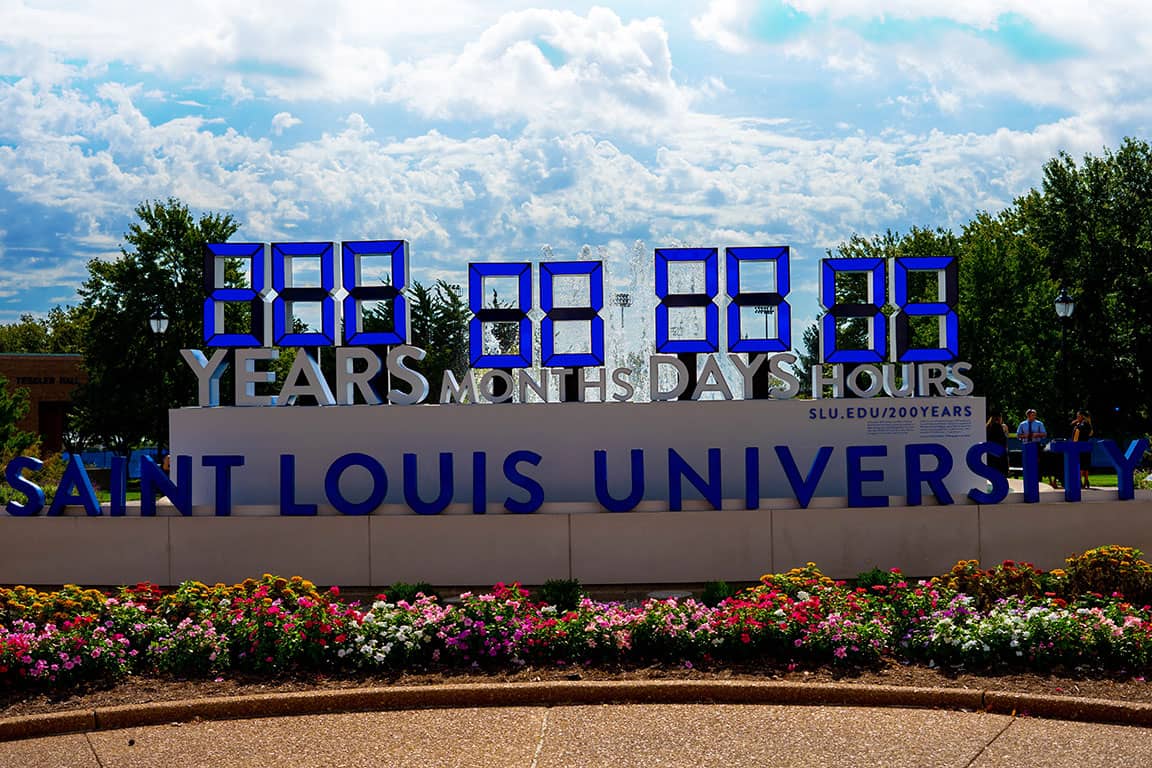 Saint Louis University students, faculty, staff and alumni have provided more than 200 years of service to the community. Photo by Steve Long

At SLU’s core is a service-focused Jesuit mission. Since 1818, the SLU community has worked to alleviate ignorance, poverty, injustice and hunger and has extended compassionate care to the ill and the needy.

In August, the Princeton Review ranked SLU No. 1 in the nation as the university most engaged in community service. Later that month, all new students at SLU were introduced to the University’s culture of service at the first new student day of service, part of Fall Welcome.

That service comes in many forms.

SLU is the site of the country’s first Campus Kitchen and the School of Medicine’s Health Resource Center, a free clinic providing medical care to the St. Louis community, is in its 25th year. Billikens join forces with non-profits such as Dance Marathon and Big Brothers, Big Sisters. SLU is home to one of the nation’s top­-five college and university Relay for Life events.

Alumni from SLU have gone on to propose solutions for food deserts, start schools for delinquent teens and deliver the youth keynote address to the United Nations. This year SLU ranked in the top 20 for medium-sized universities in sending recent grads to the Teach for America program.

The first hours on the service clock were entered in November 2017 by Emily Corey. Corey, then a junior in SLU’s College of Public Health and Social Justice, was the president of Campus Kitchen. 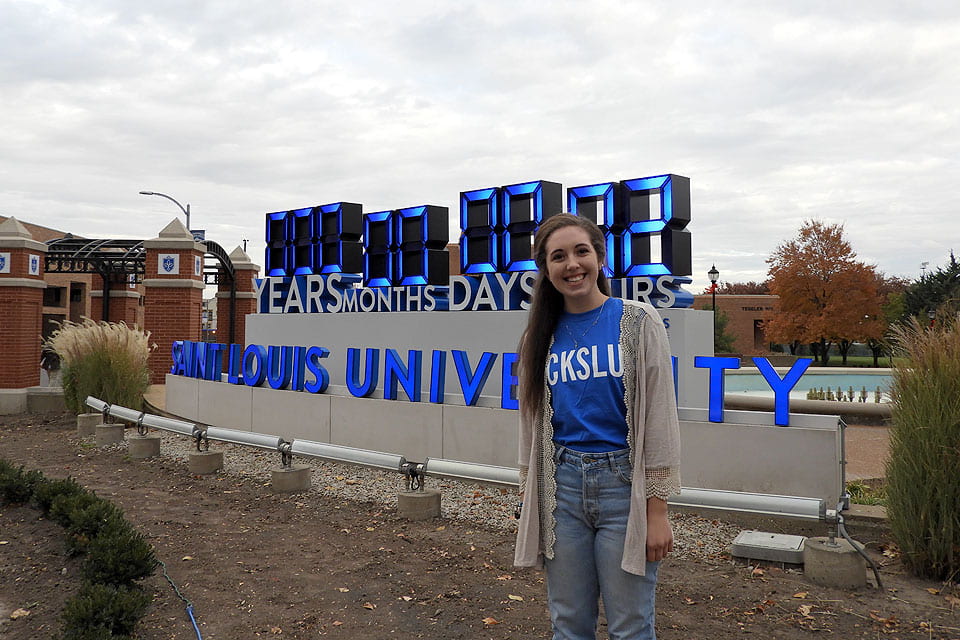 Emily Corey, a senior in the College of Public Health and Social Justice, logged the first hours on the bicentennial clock in November 2017. Photo by Ellen Hutti.

Macy Walz, a second-year medical student, volunteered in early January at Winter Inn, a temporary shelter for homeless men held in the basement of St. Francis Xavier College Church. The shelter operates on Wednesday and Thursday nights when the temperature drops below 20 degrees.

Twenty members of the Saint Louis University School of Medicine Class of 2018, participated in the Rodney M. Coe Distinction in Community Service Program, which is a longitudinal, faculty-mentored community service program. The Distinction requires students to complete a minimum of 180 hours of health-related service over four years and to partner with the community on a project in response to community need. 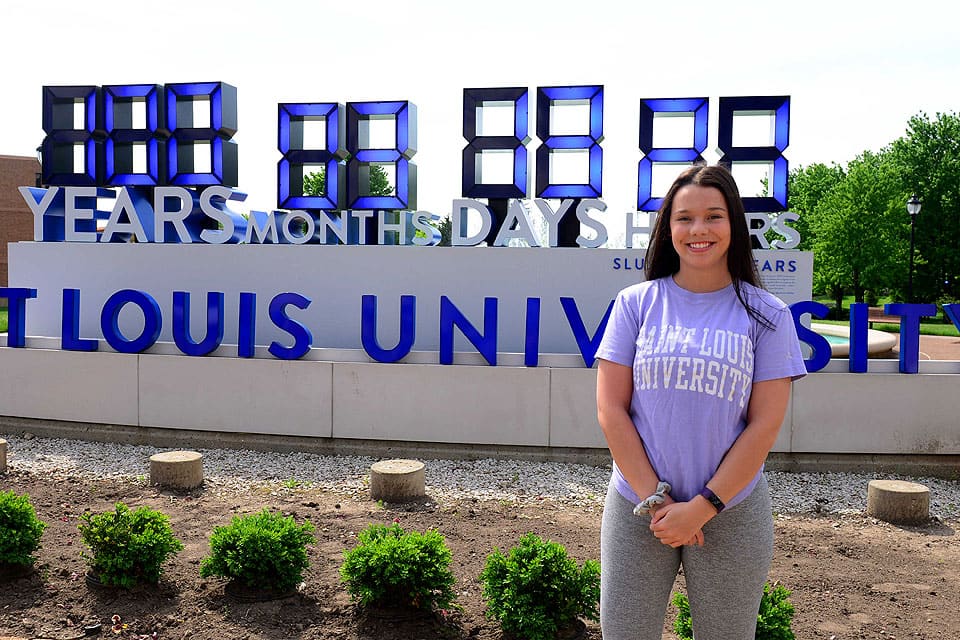 In June, students from the Department of Psychology and the Department of Civil Engineering joined a faculty research team from SLU's Center for Service and Community Engagement for a partnership project at St. Martin de Porres Elementary School in Belize City. The project is part of the Belize 2020 partnership to improve quality of life in the Central American nation.

Several SLU students and recent grads spend a year planning and funding a week of summer camp. SLU’s Camp Kesem, a free week-long summer camp for kids with a parent impacted by cancer, is one of more than 100 chapters in 40 states.

Starting this fall, a student food pantry — Billiken Bounty — opened to provide a sustainable on-campus resource to help alleviate food insecurity among SLU students, with the values of privacy, professionalism, respect and dignity.

SLU faculty and staff members make service a part of their everyday lives.

Jeremy Nagle, web content developer for the College of Arts and Sciences, spends most of his nights and weekends volunteering. He’s a longtime volunteer with Team Activities for Special Kids (TASK), a local nonprofit that gives kids with challenges from autism to Down syndrome a chance to play and grow competitively. He’s also become a regular on St. Louis airways with MindsEye, a radio station that reaches people with visual impairments within a 75-mile radius of St. Louis.

L. Michelle Lewis, the head of Saint Louis University’s Office of Institutional Equity and Diversity, has spent most of her career working in human resources and the compliance field addressing issues of access and barriers that arise for people due to their gender, disability status, race, or sexual orientation.

When not at work, she serves others as the “voice of Lincoln and Pike Counties” for MindsEye Radio. Lewis has been volunteering with MindsEye for 15 years.

Rachel Rimmerman, event and outreach coordinator for Parks College of Engineering, Aviation and Technology at Saint Louis University, spends her time connecting with others through her work with both campus and local aid groups. She is a technical mentor with SLU’s Billikens for Clean Water, a student group collaborating with Mayan communities in Belize to focus on clean, safe drinking water access. 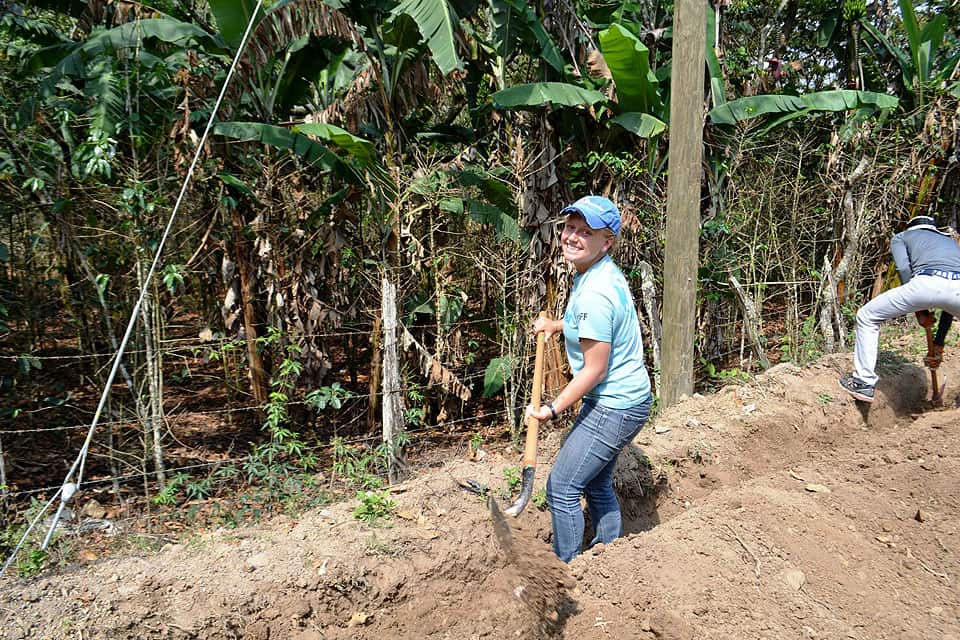 Since 2015, Rimmerman has also been on the development committee for Home Sweet Home STL, an agency that provides furniture and household items to people transitioning out of homelessness into new, stable home lives.

Dana Malkus, J.D., (Law ’04), associate dean of Experiential Education at SLU Law, works to address St. Louis’ vacancy problems through a coalition that is working on concrete solutions that will move the region forward.

Launched in November 2017, the service clock honors SLU’s bicentennial by encouraging participation in a year-long commitment to service. Time spent by students, staff, faculty, alumni, parents and community members volunteering, mentoring and improving the world around them can be logged through the 200-Years-in-One app or online.

In addition to volunteer hours entered by people linked to SLU, several landmark entities in the St. Louis region, including the Saint Louis Zoo and Missouri Botanical Gardens, and area non-profits such as Haven House St. Louis and the Assistance League of St. Louis, are also logging volunteer hours to the clock.