ST. LOUIS – A professor in the Trudy Busch Valentine School of Nursing who has spent decades studying how  and when pediatric oncologists and nurses engage in palliative and end-of-life discussions with the families of children with high-risk cancer was honored for her history of excellence in teaching, mentoring and research on Saturday, Nov. 9, at the 2019 March of Dimes Missouri Chapter Nurse of the Year Awards gala.

Verna Ferguson, Ph.D., the Irene Riddle Endowed Professor of Nursing at SLU,  received the Legend of Nursing award. She is the fourth SLU faculty member to receive the honor in its eight-year history. 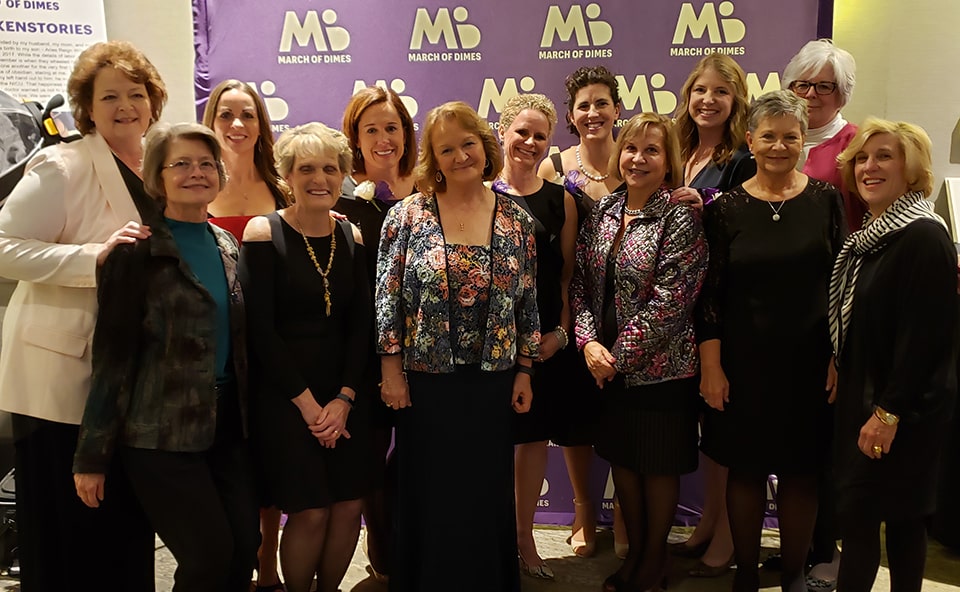 Faculty from the Trudy Busch Valentine School of Nursing surround Legend of Nursing honoree Verna Ferguson, Ph.D., center, at the 2019 March of Dimes Nurse of the Year awards. Submitted photo.

Earlier this year, Ferguson received a prestigious National Institutes of Health RO1 grant to look at how to best communicate with parents of children who have cancer that is often difficult to survive. The goal of the five-year, multiple-site grant is to see if early palliative and end-of-life supportive care discussions with parents with a high-risk type of cancer will improve the quality of life for parents and their children.

“Congratulations to Verna Ferguson, the 2019 Legend in Nursing,” said Peggy Ellis, Ph.D., interim dean of the Trudy Busch Valentine School of Nursing. “Our faculty nominees were well recognized, as were many of our alumni. In each category where a SLU faculty member was nominated, a SLU faculty member won that category.”

Ellis noted that SLU was forced to compete against itself in the Nursing Educator category, and praised nominees Christina Rariden, Kelly Fuller and Krista Simmons as outstanding nurse educators.  Other SLU winners include:

Laural Duellman, a Ph.D. candidate, was honored in the Case Management, Public Health and Occupational Health category. Jo Ann Franklin, a SLU alumnae, was named Research Nurse of the Year. Ellis said several of the nominees were SLU alums.

“I think this speaks to the quality of our faculty and alumni,” Ellis said.

Ferguson earned her bachelor’s and master’s in nursing from Southern Illinois University at Edwardsville and a doctorate from Rush University. She also completed a three-year NIH-NINR funded T32-funded postdoctoral fellowship at Indiana University, School of Nursing.

She is one of six SLU nursing faculty who are Fellows in the American Academy of Nursing. Ferguson has received numerous honors and awards for her research including the Distinguished Scientist Award by the Midwest Nursing Research Society’s Palliative and End-of-Life Research Interest Group; two writing awards by the Journal of Pediatric Oncology Nurses; Certified Hospice and Palliative Pediatric Nurse of the Year; Fellow in Palliative Care Nursing; and St. Louis Nurse Educator of the Year.

This is the eighth year the March of Dimes Missouri Chapter has held an awards dinner to recognize nurses from Missouri and southern Illinois who exemplify an extraordinary level of patient care, compassion and service. Whether serving as a health care provider, educator, researcher, volunteer and/or advisor, nurses play a critical role in advancing the mission of the March of Dimes, which is to improve the health of all babies by preventing birth defects, premature birth and infant mortality.

In 2016, alumnae and former faculty member Anne G. Perry, Ed.D., FAAN, received the Legend of Nursing award. SLU’s Ruth Murray, Ed.D., a career psychiatric nurse, was the recipient of the 2015 Legend in Nursing award. In 2014, the winner was Sr. Jeanne Meuer, a former nursing faculty member whose specialty is obstetrical nursing and midwifery. Alumnae Pat Potter received the 2017 award.

Founded in 1928, the Trudy Busch Valentine School of Nursing at Saint Louis University has achieved a national reputation for its innovative and pioneering programs. Offering bachelor's, master's, and doctoral nursing programs, its faculty members are nationally recognized for their teaching, research and clinical expertise.