Elizabeth Blake, Ph.D., is an assistant professor of Russian and the Russian division coordinator in the College of Arts and Sciences's Department of Languages, Literatures and Cultures. Blake's research interests include migration and exile cultures, the 19th Century European novel, studies of empire and dialogues between Catholicism and Orthodox churches. Her latest work and new book examine the work of Fyodor Mikhailovich Dostoevsky, a piercing social critic, philosopher and giant of Russian literature. 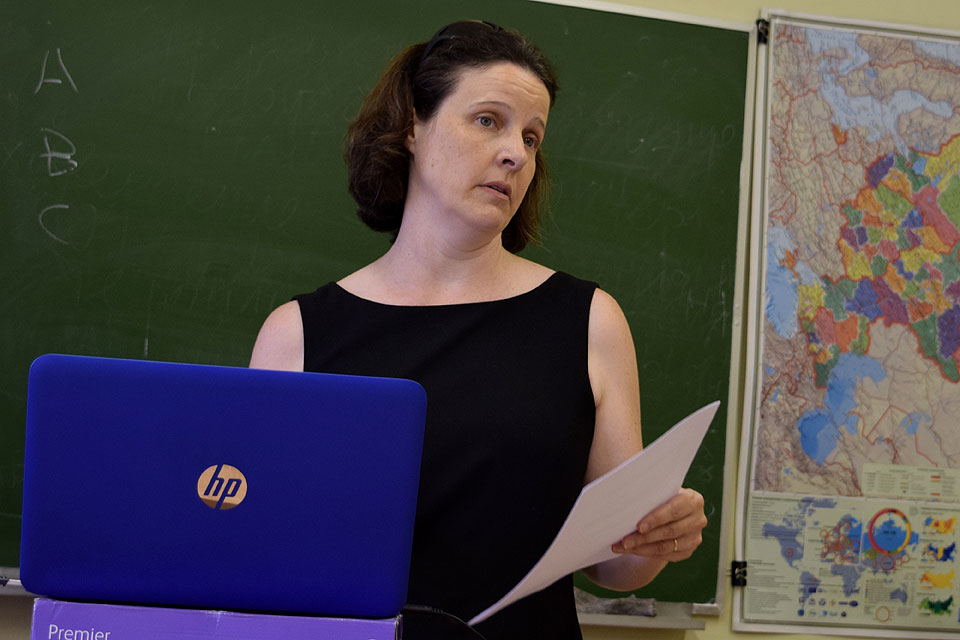 Elizabeth Blake, Ph.D., first read Fyodor Dostoevsky's Crime and Punishment in high school, but a growing interest in the work of existentialist writers including Albert Camus led her to focus on the Russian writer as a graduate student. Submitted photo

Travels from Dostoevsky's Siberia, published in the summer of 2019 by Academic Studies Press,  is a collection of translations with introductions and commentary on the texts written by Siberian exiles who shared Dostoevsky’s experience of being deported to Western Siberia. These accounts provide readers with uncensored insights into crime, power and punishment in Dostoevsky's Russia.

It is her second book exploring the work of the Russian writer, who is also the author of several classic novels including Crime and Punishment, The Brothers Karamazov and Notes from the House of the Dead.

I am native to the D. C. area, majored in French and Russian Studies at the College of William and Mary and then went on to receive my Ph.D. from The Ohio State University in Slavic Languages and Literatures.

I have travelled to and conducted research in several European countries, but I have spent most of my time in Moscow and St. Petersburg, Russia, although I did visit Siberia on my latest trip.

Tell us about your book.

My book is a collection of translations with introductions and commentary on the texts written by Siberian exiles who shared Dostoevsky’s experience of being deported to Western Siberia.

They provide the reader with uncensored witness testimony concerning interrogations, denunciations, incarcerations, corporal punishment, and means of survival.  For this reason, they can enrich our reading of Dostoevsky’s autobiographical novel about his imprisonment, Notes from the House of the Dead, and provide new historical information about a repressive judicial system under the tsars.

What sparked your fascination with Dostoevsky?

I read Crime and Punishment in high school, but I did not appreciate Dostoevsky until after I read some of the existentialists, especially Camus’s The Renegade and The Fall.  Then, I returned to Dostoevsky, bought the first volumes of Joseph Frank’s Dostoevsky autobiography, and decided to focus on Dostoevsky’s contribution to Christian thought for graduate school.

Can you tell us more about the members of Polish literary society with whom Dostoevsky worked?

Dostoevsky was imprisoned with two men who have written recollections about the experience, but the texts are not completely independent of one another.

Szymon Tokarzewski’s remembrances have been published in Polish and Russian, but I translated memoirs written by Józef Bogusławski (and edited by Tokarzewski) from an archival copy donated to a library in 1898 and first published in partial form in 1896.  I argue that the provenance of the manuscript, based on historical information, predates the 1863 January uprising, so it is therefore of greater interest to Dostoevsky scholars seeking information about his 1850-54 term in the Omsk prison fortress than Tokarzewski’s later posthumous publications (1907/1918).

What compelling things have you unearthed in the Russian writer’s relationships with his Polish counterparts?

All of the authors in the collection agree that the authorities in Siberia display tyrannical habits, that informants cause great harm, and that their very survival depends on the good will of persons of influence.

Still, I had not appreciated before completing the translation how much Bogusławski resented Dostoevsky’s military education and attributed the author’s loyalty to the tsar to the influence of the Orthodox Church and the Russian military.  I think that the most shocking discovery in these uncensored recollections is the depiction of the criminal environment (physical and sexual assault, circulation of counterfeit money, prison guards’ appropriation of inmates’ property, and aggressive verbal abuse) in Dostoevsky’s prison.

In addition, the common images of exile shared by these writers, such as the organizing motif of homeland, the privilege of martyrdom, the witness to depravity, and a fascination with the criminal mind, reflect an experience that transcends linguistic and national divides.

Tell us about your research process for this project.

I have been gathering materials on Polish exiles in Siberia for many years, and I have presented on the information in various local, national, and international fora in addition to publishing several articles on the topic.

Several sources of funding––including a Mellon from SLU, a Department of Education award, and a Department of State grant––allowed me to travel to Russia and Poland to collect the materials necessary for the project over the course of the past three years.

What does lessons do Dostoevsky’s works, particularly House of the Dead, have for us today?

I often work on cultural and religious conflict in Russian Imperial space, so I approach House of the Dead from this standpoint.  When I look at Siberian writings from this period, I am impressed by the levels of tolerance and intolerance displayed by exiles from various nations as they seek to define communities and develop relationships that allow them to survive, even to thrive, in these hostile settings.  Dostoevsky’s crime novels, Crime and Punishment, The Idiot, Demons, and The Brothers Karamazov, display a profound understanding of and sympathy for an array of criminals, so they celebrate the authors’ ability to translate a traumatic experience into narratives exploring redemptive suffering.

In our current debates about the criminal justice system, political discourse and policing, does Dostoevsky’s experience as a political prisoner in Siberia offer insights for us today?

Since my expertise is nineteenth-century European literature, I do not usually venture into the contemporary period with Dostoevsky’s experience.  However, I will be teaching a course in spring 2020, entitled “In Prisons Dark,” which explores the thesis that the habit of incarcerating and exiling political misfits in the nineteenth century paved the way for the GULAG in the twentieth.  Having read many accounts of arrests and imprisonment, I can also conclude that the arguments maintaining that ethnicity, class, financial resources, and political persuasion impact the carceral experience have been true for centuries.

Dostoevsky’s novels are also frequently invoked in debates against capital punishment.  If we believe our judicial system to be democratic, then maybe it should concern us that parts of it resemble institutions in Dostoevsky’s Russia.

How do your book and your writing life inform your life as a SLU faculty member?

Both of my books have been impacted by a course I developed for the English department, “Dostoevsky Through the Centuries,” and another course I designed for the Department of Theological Studies, “The Russian Orthodox.”

I have also given lectures in the local community related to this research and am currently pursuing closer ties with Catholic Studies, since I will be giving a lecture on October 14th, “Collared and in Siberia: Catholic Priests in Imperial Russia.”

Being a cradle-Catholic, having taught a course on Orthodoxy for a decade, and being married to a Presbyterian liberation theologian, I am a visible presence in the spiritual life on campus.

After I complete my third book, as a requirement of my grant, I plan to work on a project in an on-line platform summarizing and organizing my Siberian research in order to rebuild the personal histories of prominent exiles with respect to their conspiratorial history, place of incarceration, and location(s) of exile.  At this point, I hope to involve students in a larger guided research project.
What is your favorite thing you encountered in the archive? Can you tell us its story?
My favorite early find from my 2015 trip to Krakow is published in this new collection. Although I was looking through folders of Polish literary figures who had been exiled to Siberia, I found a handwritten copy describing the sentencings of 22 of the Petrashevtsy, including Dostoevsky.  It offers further confirmation of the links between the Orenburg circle of writers and Dostoevsky’s co-conspirators, so it joins two chapters in Russian Siberian history––Dostoevsky’s and the mass deportation of Poles.
How does this work speak back to your way of living out SLU’s Jesuit mission?

My international collaborations speak to the mission’s purpose to welcome representatives of different ethnic and religious backgrounds, and my own research recaptures a history of ecumenical dialogue (Anglican, Orthodox, and Catholic) which receives little attention, owing to the Bolshevik Revolution with its destructions of churches, extermination of clergy, and persecution of Christians.

The University resources I have used have been combined with national grants in order to examine the hardship of exile for the inter-revolutionary generation of Poles who shared Dostoevsky’s experience of incarceration, deportation, deprivation of financial assets, and loss of noble privileges.

It also helps to preserve for Russians an early chapter in their national history of political repression, which is a focus of the well-known International Memorial Project.  In the project’s catalogue of victims from the Soviet period, one may find a detailed list of resources on the persecution of the Catholic Church (1918-1980s), which unfortunately has a rich history in the nineteenth century.

For those who know enough Russian to read these documents, the spring course “In Prisons Dark” will present an opportunity for them to conduct original research based on rare resources.

What else should we know about you? 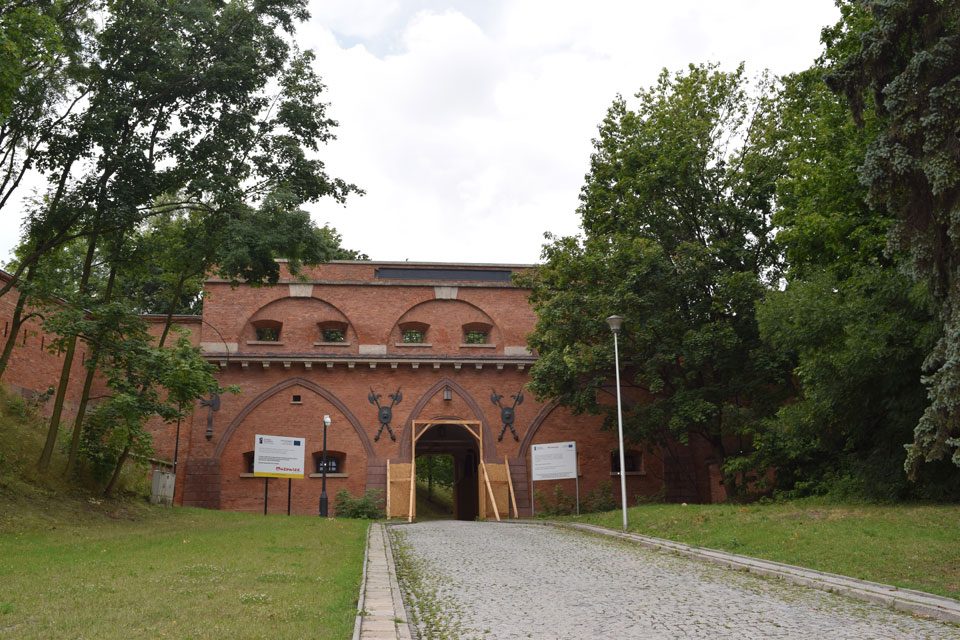 Write Stuff is a new, occasional series of interviews with SLU faculty and staff authors who have newly-published or forthcoming books. To submit your work for possible inclusion in the series, email Newslink.