DPS Takes a Polar Plunge to Help Others

As part of their commitment to being men and women for others, members of Saint Louis University’s Department of Public Safety (DPS) donned costumes and took an icy dip to benefit the Special Olympics Missouri. 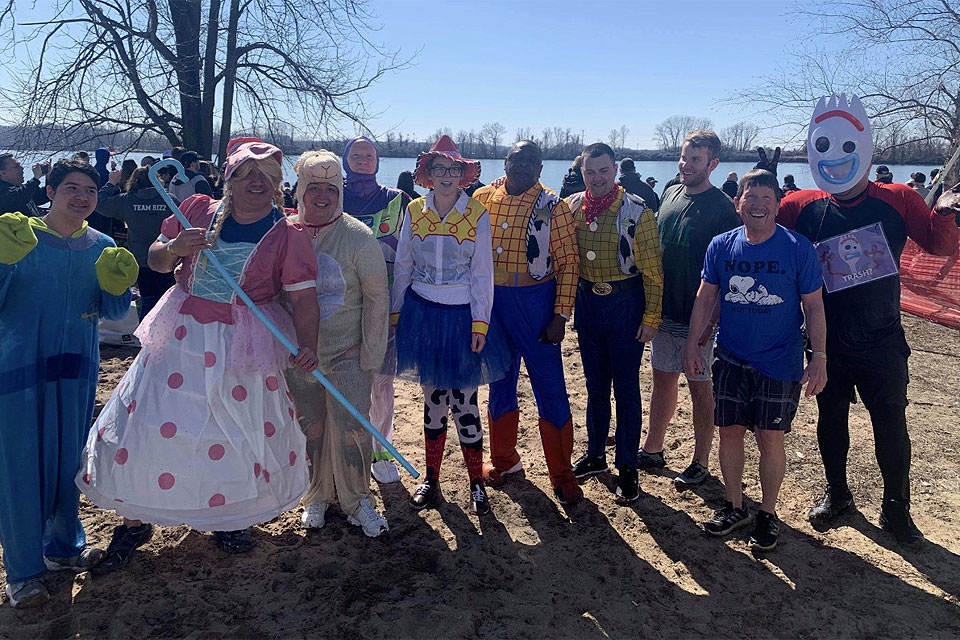 The heroes of Toy Story, as portrayed by members of SLU's Department of Public Safety (DPS), share a laugh after their Polar Plunge to raise funds from the Special Olympics Missouri on Saturday, Feb. 29. Submitted photo

Bringing the heroes of Toy Story to life, the department took part in the Special Olympics “Polar Plunge” on Saturday, Feb. 29, carrying on both a department tradition of service and deepening relationships department members have formed with Special Olympics athletes and their families over many years.

The February plunge raised more than $2,500 to benefit the Special Olympics. And SLU’s Woody, Jessie, Buzz and other Toy Story friends earned first prize for their coordinated costumes.

The Polar Plunge, an event where teams raise money benefiting the Special Olympics Missouri, “plunge” into freezing cold water, is the latest service DPS has undertaken as part of the partnership.

In October 2019, DPS officers served as guest judges to honor Special Olympics athletes at a bowling contest at SLU’s neighboring Moolah Lanes. Officers led the assembled crowd of fans in cheers and served as award presenters, giving hugs and high fives to every one of more than 110 children participating in the day’s bowling.

In February 2018, officers plunged into the icy waters of Creve Coeur Lake as part of the Special Olympics’ Law Enforcement Torch Run, raising $1,415 and contributing hours to SLU’s bicentennial service. DPS officers have also organized barbecues and car washes to benefit the group. Officers and their families also regularly volunteer at Special Olympics events as coaches, assistants and in other support roles.