Saint Louis University, along with nine others from across the country, was invited to participate in the elite University Nanosatellite Program (UNP) in Albuquerque, New Mexico. 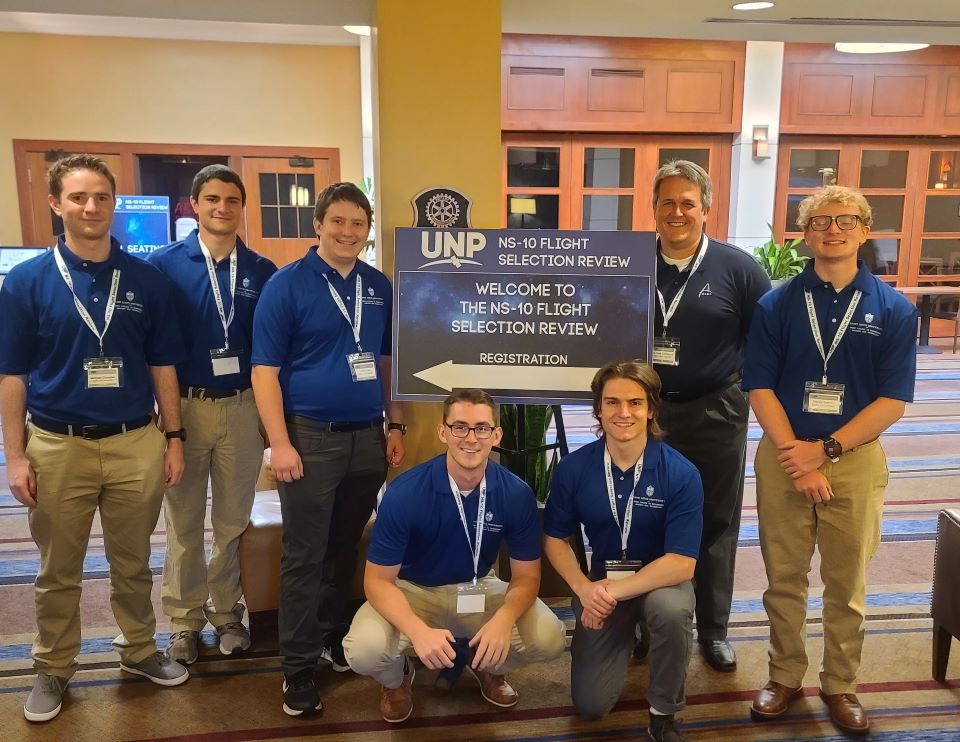 “Although SLU was not one of the selected schools, it was a productive experience because we’re already fine-tuning our mission for the next cycle,” said Dompke, who also serves as program manager of SLU’s Space Systems Research Laboratory, the undergraduate research organization whose mission is to perform world-class research in the design, fabrication, and operation of space systems.

Dompke was one of six students who joined Michael Swartwout, Ph.D., associate professor of aerospace and mechanical engineering at Parks College of Engineering, Aviation and Technology, at the competition. A total of eight students worked on the project this summer.

The two-year project culminated the weekend of August 13 when SLU undergraduates presented the DORRE mission to a panel of 12 industry experts. DORRE is a small constellation of spacecraft and ground systems (telescopes). AI techniques are used to automatically detect and sense natural events, such as auroras, thunderstorms, or meteors.

“St. Louis is far from the centers of space activity; therefore, it’s difficult for our students to get in front of space professionals,” Swartwout said. “It’s real-world experience and networking with people they wouldn’t ordinarily have an opportunity to meet.”

People like retired Boeing engineer Keith Bennett, who Swartwout credits with developing the ideas behind the DORRE mission. Swartwout and Bennett have collaborated on several projects in the past.

Texas A&M, Michigan Tech, and the University of Minnesota advanced in the competition. SLU and Missouri S&T were among universities not selected to continue with Phase B, which would’ve provided additional funds to purchase special instruments and secure a sponsored launch.

Swartwout said the team will finish the DORRE mission using other resources and submit a proposal to secure a sponsored launch through NASA.

Saint Louis University's Parks College of Engineering, Aviation and Technology offers aviation degrees and engineering degree programs that enable students to study these technical disciplines in a traditional university setting. As the first federally-recognized flight school, Parks College has a rich history of creating well-rounded leaders in aviation and engineering fields such as civil, electrical, computer, mechanical, biomedical and aerospace.