Well-wishers are invited to send a birthday card to a true SLU legend, Dame Mary Bruemmer, on the occasion of her 101st birthday. The cards will be shared with Bruemmer on her birthday, Feb. 26, 2021. 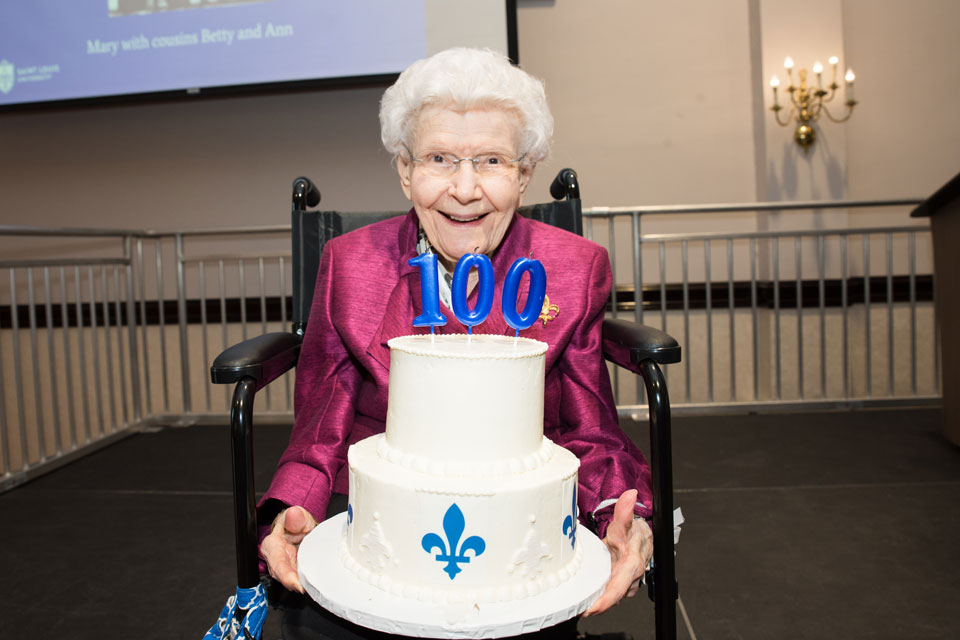 Setting foot on campus in 1938 as a freshman, Bruemmer went on to become one of the first women leaders in St. Louis higher education, a Vatican dame and a storied figure in University history.

In her 64 years at SLU, Bruemmer impacted every facet of life on campus – from overseeing dining hall menus to advocating for women on campus to serving as a goodwill ambassador to alumni and friends of the University.

Bruemmer officially retired from the University in 1990. She continued to “volunteer” until 2011, working with various University organizations including the Alumni Office, Alpha Sigma Nu, the Women’s Council, and the Women’s Commission, often serving as a “goodwill ambassador.”

In 2016, Bruemmer was named a Dame Commander of the Order of Saint Sylvester, Pope and Martyr.

In 2020, the University honored Bruemmer with an on-campus birthday party. University President Fred P. Pestello, Ph.D. toasted her at the party, telling those gathered that “where ever you (Bruemmer) are in the world, you will always reside within the hearts of those bold enough to don the fleur de lis, share the gratitude of Oriflamme and proudly proclaim, while winking, that they are a Billiken.”

Read the Legend of Mary Bruemmer

Cards and well wishes may be sent to: