She’s been called “one of the finest Jesuits we have.” 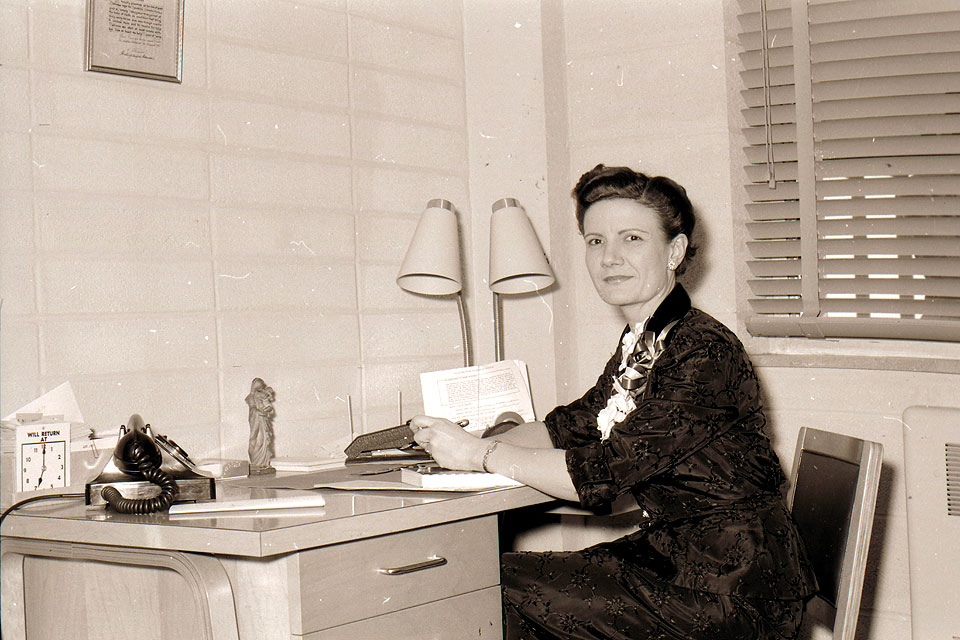 The future Dame Mary Bruemmer hard at work at her desk in October 1956. Photo by Boleslaus Lukaszewski, S.J.

At age 100, Mary Bruemmer is truly a daughter of Saint Louis University, and a Billiken, forever.

Setting foot on campus in 1938 as a freshman, she went on to become one of the first women leaders in St. Louis higher education, a Vatican dame and a storied figure in University history.

Serving SLU for 64 years, Bruemmer impacted every facet of life at SLU – from overseeing dining hall menus to advocating for women on campus to serving as a goodwill ambassador to alumni and friends of the University.

“Her years of dedicated service, love and commitment to Saint Louis University are woven into the tapestry of our 200-year history,” University President Fred P. Pestello, Ph.D., said. “SLU will never be lacking for her presence.”

‘More’ Always on Her Mind

Born in 1920 in Madison, Illinois, Bruemmer’s parents, Ignatius and Adele, encouraged her to push herself and go the extra mile.

“They encouraged me to study, practice the piano, to get involved with extracurricular activities, and to develop any talents I had,” Bruemmer recalled. “That ‘more’ has been in the back of my mind ever since.” 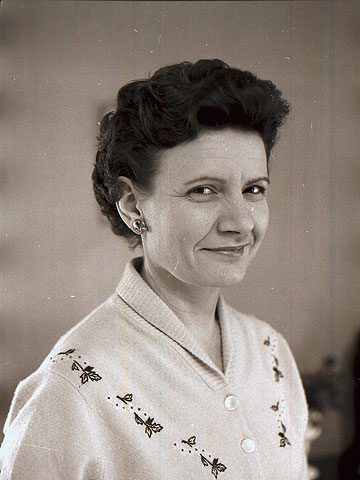 After graduating from Madison High School, Bruemmer became one of a handful of women enrolled at SLU, taking courses in education. It was one of the few areas of the University to accept women at the time.

In an era when few women walked college halls, Bruemmer took a “bold step to enter the world of higher education.”

“If even one girl in a Madison High School graduating class went to college, it was news for the local paper,” Bruemmer said.

Taking a streetcar from Madison across the McKinley Bridge into St. Louis, Bruemmer became involved in numerous campus activities while studying to be a teacher. She wrote for the University News and the Fleur de Lis, a student-run literary magazine.

Until Bruemmer joined their staffs, neither SLU’s student paper of record nor the magazine had female staff members.

Those early bylines were just a few of the bold steps she would take in her decades as a Billiken. 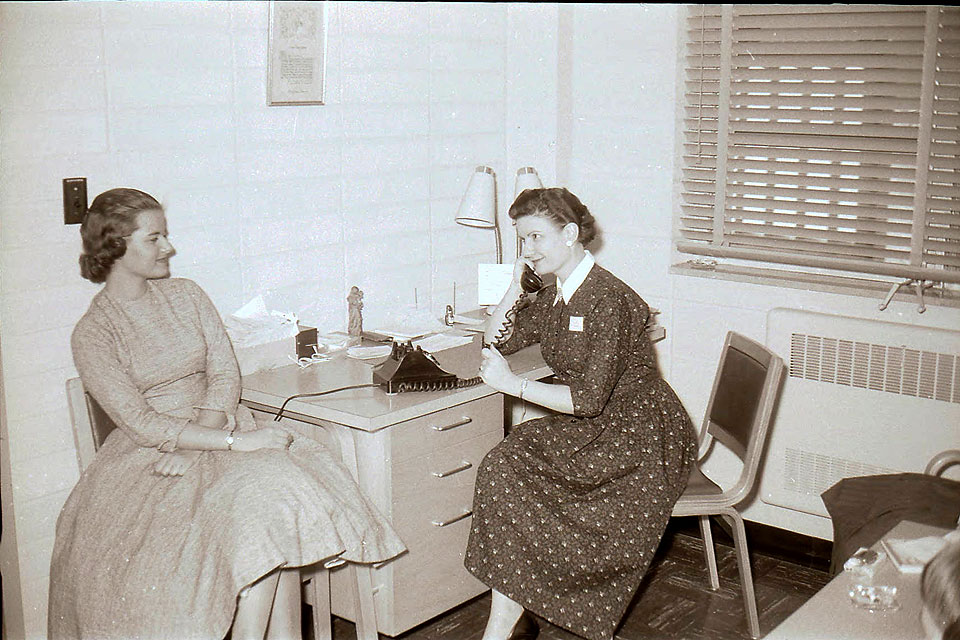 Mary Bruemmer (right) assists a student in this November 1956 archival photo.  Bruemmer, a campus leader, and 1942 graduate, returned to SLU as  director of Marguerite Hall, the University’s new dormitory for women students. She went on to become dean of women and later, dean of students. Photo by  Boleslaus Lukaszewski, S.J.

Bruemmer earned her bachelor's degree in education and history with a minor in English from SLU in 1942.

The University offered her the role of dean of women after her graduation, but with World War II raging, Bruemmer stepped away from SLU, taking a job as a Red Cross vocational counselor working with veterans.

Before returning to SLU 13 years later, Bruemmer volunteered her time with Catholic and community organizations including serving as executive secretary and program director for the Catholic Youth Organization (CYO) in Springfield, Illinois.

She also served as the public relations director for the Community Chest (United Way) in Springfield, and she put her skills to use helping other organizations with publicity efforts and by volunteering with the Springfield Municipal Opera, the Springfield Symphony Orchestra and the Springfield Theatre Guild.

A New Dean, A New Mission 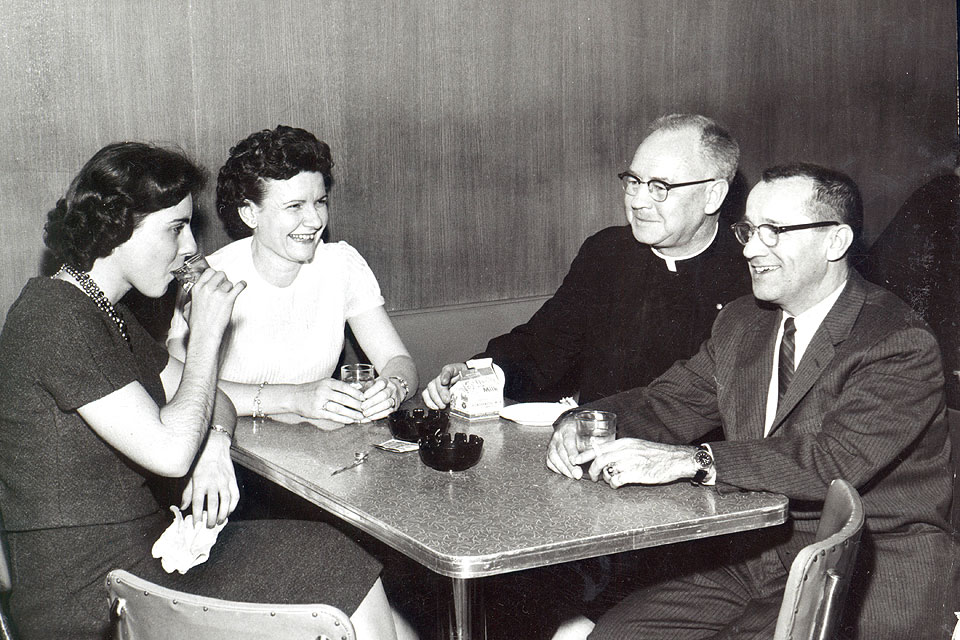 In 1956, Bruemmer returned to SLU, becoming director of Marguerite Hall, the University’s new dormitory for women students. New to the job, Bruemmer asked the University for $100 to fund a fact-finding bus trip to a number of Midwestern universities to explore best practices for running a women’s residence hall.

Legend has it that, on her return to St. Louis, Bruemmer conscripted Jesuit Scholastics living in Fusz Memorial Hall to help ready Marguerite Hall for their fellow students.

By 1960, Bruemmer had become director of women’s housing at the University and had earned a master’s degree in education from SLU.

Seven years later, she was promoted to dean of women, stepping into the shoes of Nancy McNeir Ring, the inaugural dean of women.

SLU will never be lacking for her presence.”

“The number of women students kept increasing, and the Jesuits realized they didn't know enough about advising them,” Bruemmer said. “So Nancy did that. But as a woman, she also represented something more. Because we had no female Jesuits, no wives of Jesuits, she helped with the hospitality. She made the University what it was, hospitable.”

Ring’s mission became Bruemmer’s. She became the “go-to person” for welcoming all new people to SLU.

She went on to enlist students in her quest to give new students and their families a warm welcome, becoming advisor to Oriflamme, SLU’s storied group of student leaders who now help families and new Billikens move in and make SLU their homes.

As dean of students, Bruemmer “was involved with the entire University: residence halls, menus for the dining halls, Busch Student Center, everything.” 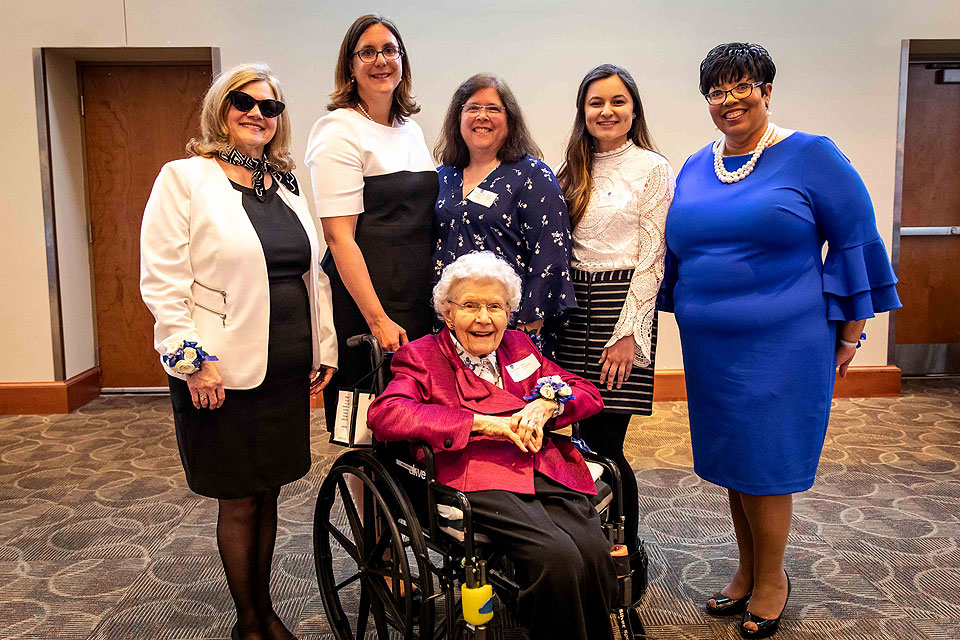 In her decades at that University, Bruemmer remained a staunch advocate for women, within the halls of SLU and beyond.

After leading efforts to open Oriflamme to women in 1972, Bruemmer spearheaded and founded the organization that became the University’s Women’s Commission a year later. The commission focused on supporting women’s access and leadership throughout the University and, in the decades since its founding, has sponsored workshops, trainings, and a grants and awards program to honor female achievement at SLU. Bruemmer would receive the commission’s highest honor, “Woman of the Year,” in its inaugural year in 1977.

In addition to her advocacy on behalf of women, Bruemmer also advised student organizations including the U-News, Fleur de Lis and Alpha Sigma Nu, the national Jesuit Honor Society.

A Lifetime of Service Honored By Many 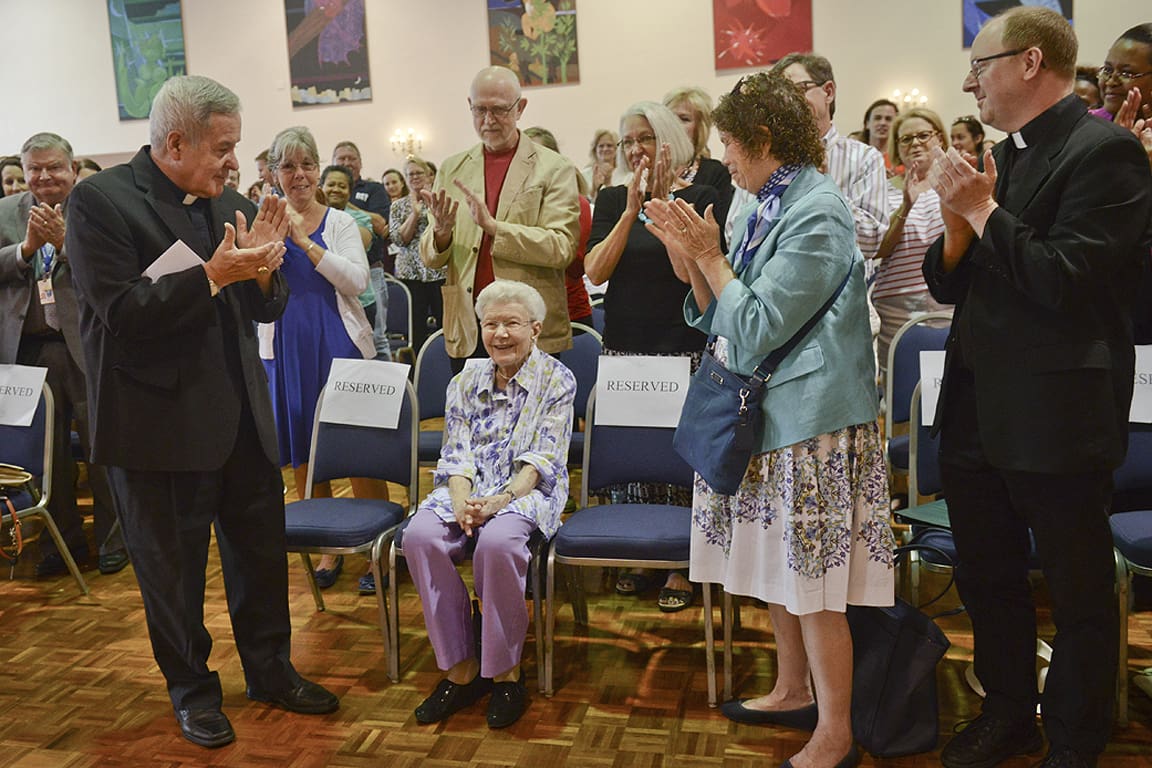 Following her years as dean and in a role in the Division of Development, Bruemmer officially retired from the University in 1990.

However, she was never far from campus. A “volunteer” until 2011, Bruemmer worked with various University organizations including the Alumni Office, Alpha Sigma Nu, the Women’s Council, and the Women’s Commission, often serving as a “goodwill ambassador.”

Her 64 years of service to the SLU community did not go unnoticed.

Four years later, the Vatican recognized Bruemmer’s contributions to Catholic education and society by naming her a Dame Commander of the Order of St. Sylvester, Pope and Martyr. The knighthood is presented by the Roman Catholic Church to those who demonstrate exemplary lives in society, business or the military.

With the opening of its new residence hall in 2017, Spring Hall, Bruemmer’s name again became a fixture of campus life – this time as the Mary Bruemmer Plaza, where students are welcomed home to SLU each fall, and Bruemmer’s name and story featured prominently as part of SLU’s bicentennial celebrations in 2018. 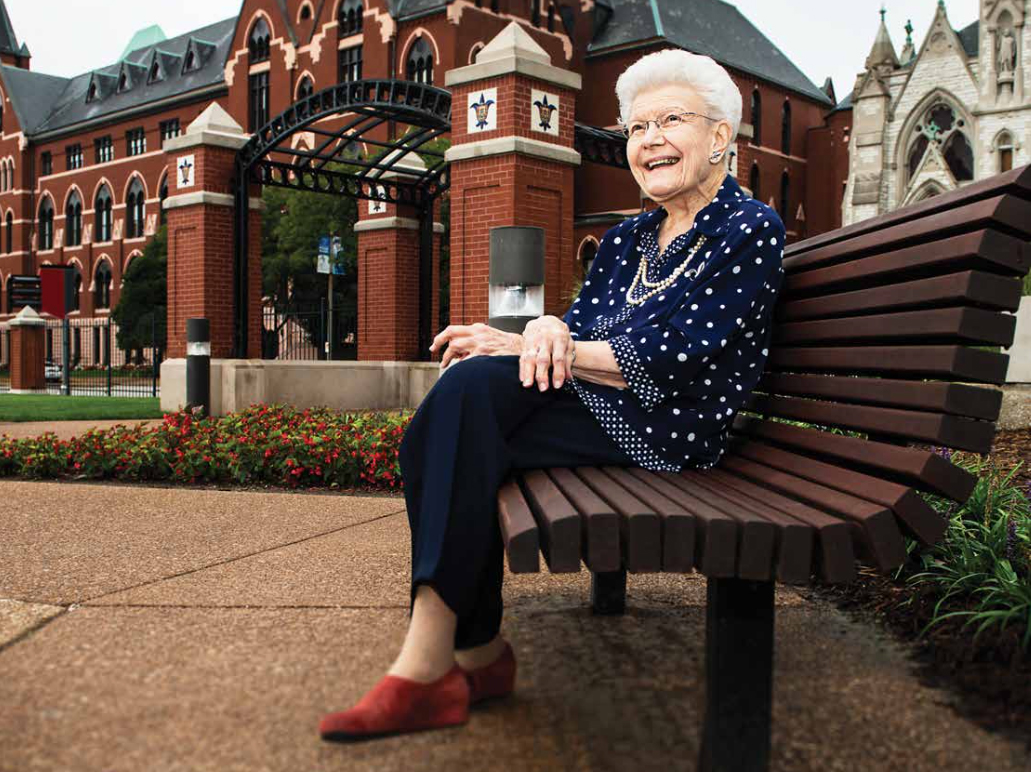 Alumna Mary Bruemmer had devoted more than 60 years to serving the SLU community, first as a student, and later as a dean, administrator and volunteer. Photo by Steve Dolan

Join University President Fred P. Pestello, Ph.D., and the entire Saint Louis University community as we celebrate Mary Bruemmer and her impact at SLU on her 100th birthday at a celebration on Wednesday, Feb. 26, from 2 to 5 p.m., in the Saint Louis Room, Busch Student Center.

There will be a brief formal program at 3 p.m. and opportunities to wish Mary well.

Complimentary parking will be available in the Laclede Garage at 3602 Laclede Ave.

Whether you are able to attend or not, please consider writing a birthday message to Mary on the registration form before Friday, Feb. 21. We will share the message with her at the event.

Read even more about Mary's exceptional SLU story in Universitas.