Curricular proposals (for new programs or modifications to existing programs) normally originate in the academic departments or at the college/school level if those units have no departmental structure.  The faculty who are the most knowledgeable about the subject content and who deliver the curricula of their respective units are its chief drivers.  These academic units all have faculty-led governance structures in place to assess and approve curricular proposals prior to advancing them to their deans and beyond.

The Undergraduate Academic Affairs Committee (UAAC) and the Graduate Academic Affairs Committee (GAAC) currently are the next step in the curricular development and approval process.  Composed primarily of faculty representatives from the colleges, schools, and centers, with additional stakeholder representation, these bodies engage in the development, improvement, and quality assurance of the curricula under their purview.  In so doing, they serve in a critical advisory role to the provost and the academic leadership of the School of Medicine and Madrid, Spain, campus.  The University Undergraduate Core Committee (UUCC), also constituted primarily of faculty, is the academic governance body responsible for the development, implementation, assessment, and revision of the University Undergraduate Core and associated policies and procedures.  Once the Undergraduate Core is in place, the UAAC will govern only non-core curricula.

All proposals from UAAC/GAAC to create and implement new academic programs and related policies and initiatives are submitted to the Council of Academic Deans and Directors (CADD) for its collective endorsement to the Provost or Vice President for Medical Affairs, as appropriate.

The work of these entities significantly facilitates shared governance and decision-making throughout the institution. Ultimately, the Board of Trustees has approval authority over the addition of new degree programs and modifications of existing programs. 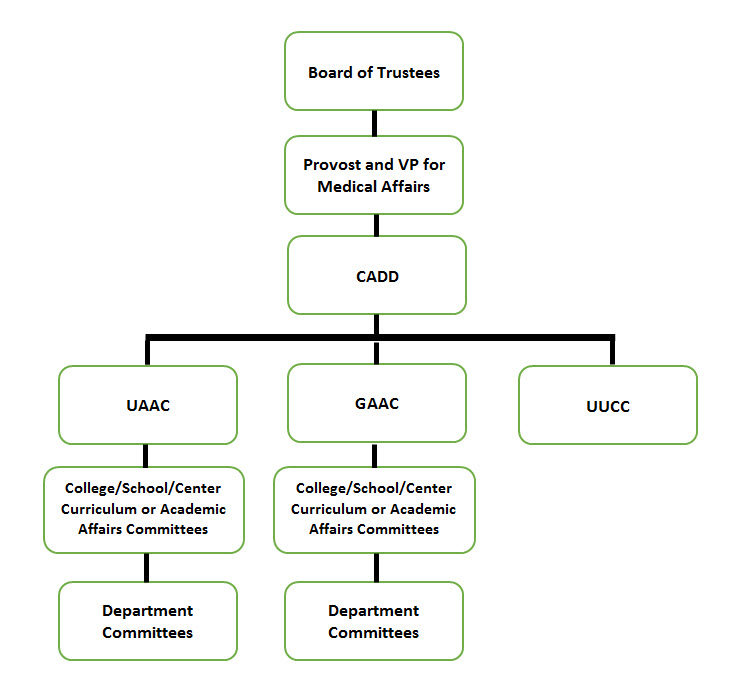