Encouraged to share the value of love with those around them, and to pay forward the spirit of cura personalis, Saint Louis University's newest graduates became alumni to the cheers and applause of family, friends and the entire University community at midyear commencement on Friday, Dec, 13. 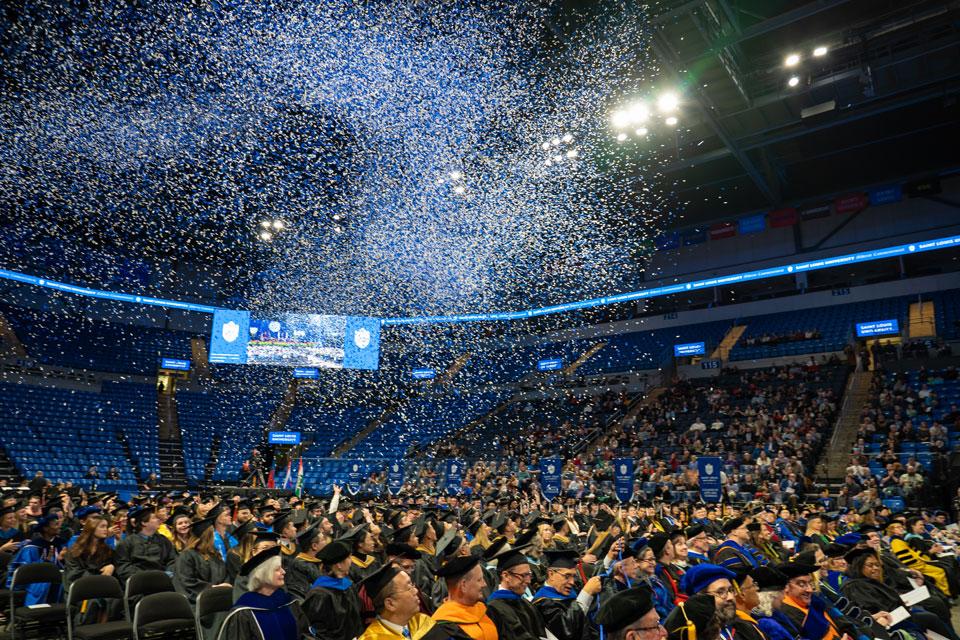 The confetti flies to celebrate SLU's newest alumni. Photo by Steve Long
Hundreds of new graduates snagged selfies, donned decorated caps and celebrated their new degrees before a crowd at SLU's Chaifetz Arena, urged on by University leaders, faculty, staff members and their fellow Billikens."Why not love yourself enough to take care of yourself so you can live the higher purpose for the greater good?" graduating senior Glenda Nelson, the ceremony's student speaker, asked her fellow new alumni.

"SLU is not just the university you went to," University President Fred P. Pestello, Ph.D., told the new graduates and crowd of well-wishers, "but the place you go from. Wherever your path takes you, lead with mercy and love." 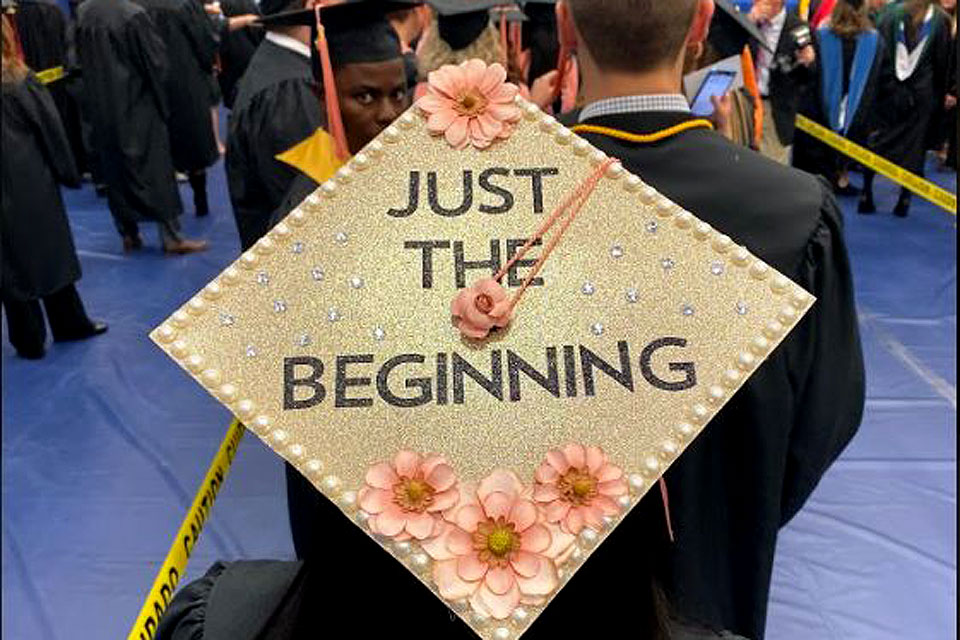 SLU's newest alumni readied for the next steps of their journeys, embracing the paths before them from cap to toe. Photo by Stephanie Mueller

Embracing Love to Survive and Thrive

A first-generation college student, Nelson, a psychology major in the College of Arts and Sciences, recounted throwing herself into her SLU education - juggling 17 credits hours per semester while working two jobs and being an active member in five different campus organizations.

Wherever your path takes you, lead with mercy and love."

During her time at SLU, Nelson served as president of the Commuter Student Association, working on enhancements to commuter orientation programming, meal plans and transit programs. She was also involved with the Black Student Alliance, assisted her fellow students as a commuter assistant and worked in student positions in the Busch Student Center and in the University's Office of Alumni and Donor Engagement.

"I thought that if I devoted the majority of my time to helping others and pushing myself, I would live my higher purpose for the greater good," Nelson said. "However, it was a façade. I was focused on too many things; I just couldn’t get a balance of my life, and it started to take a toll on my health."

Two years ago, Nelson was diagnosed with a benign brain tumor after suffering from chronic migraines. Following her diagnosis, she faced depression and battled doubts about her path in higher education. 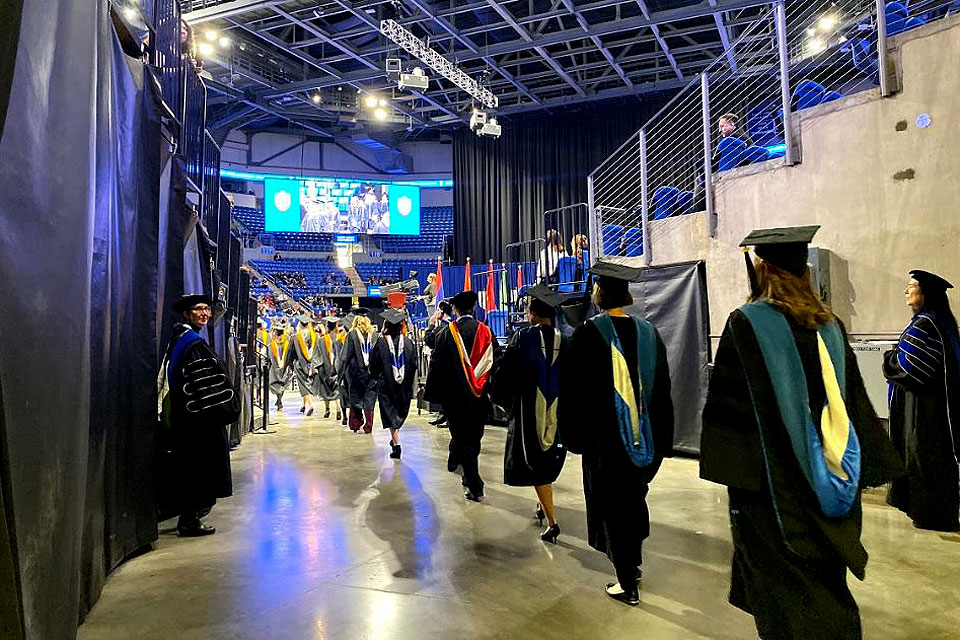 "I felt that I let down my friends, my family, and especially myself," Nelson recalled. "I started to wonder if those people in high school were right. Maybe I didn’t belong at Saint Louis U, maybe I wasn’t fit to live the higher purpose for the greater good."

"But then a small voice said to me, 'I will never give you more than you can handle,'" she continued. "'Yes, you are here to spread the love that I gave you. But don’t forget to love you.'"

Following her recovery and return to SLU, Nelson embraced a new balance in her life, one encouraged her fellow graduates to keep in mind as they began their new chapter as alumni. That balance, she explained, comes from understanding the value of love - of self and of others.

"Love is what kept me here at SLU.  Love is what made me realize how important is was to not forget to be with those who care about you most, also not forgetting to care for yourself as well," Nelson said.

"So, here today, at Saint Louis University, this commencement is not the ending, but the beginning. It’s the beginning of our mission to share the message of love. Now, I do not claim to know a lot, because I am still learning even today," she continued. "So, I encourage you all to not only go forth and set the world on fire with your amazing talents and skills. But also set it on fire with the eternal and blinding flame of love."

For Katie Kelting, Ph.D., winner of this year's Nancy McNeir Ring Award, love, as expressed through "paying it forward" can create greatness.

Noted for her devotion to students, Kelting, assistant professor of marketing in the Richard A. Chaifetz School of Business, told the new graduates to be mindful of how they "pay it forward" in their careers and personal lives.

So, I encourage you all to not only go forth and set the world on fire with your amazing talents and skills. But also set it on fire with the eternal and blinding flame of love."

Noting the influence of her own teachers, Kelting said she had realized that her way of changing the world for good was to teach. She spoke of teachers who had taken her to sports games, who visited her when she recovered from surgery and who had attended her wedding.

"I have a lot of paying it forward to do, and thus I do not see myself slowing down anytime soon," Kelting said. "I am going to continue my best to pay it forward each day. But on a day like today, when my efforts as a teacher are formally acknowledged and done so in a setting like this, I have to stop and admire the power of this life mantra. Paying it forward creates greatness."

"The spirit and heart of SLU student is contagious. You have made me think about and help others. Without even knowing it, you have started a “pay it forward” movement," Kelting continued. "My hope is that you will say yes. My hope is that when you leave SLU, when you start working in your respective careers and when you become members of new communities, that you will continue to think about and help others and that you will continue to inspire others around you to do the same."

"In sum, my hope is that you will continue to “pay it forward” in your own special way and will spread greatness beyond the community of SLU and Saint Louis," she said.

New Grad Offers Prayer for Determination to 'Finish This Race'

Following speeches by Pestello, Nelson and Kelting, SLU's newest graduates shook Pestello's hand as their names and degrees were called. Pestello asked the graduates to stand and conferred their new degrees upon them, declaring them "sons and daughters of Saint Louis University forever!"

A new graduate of the School for Professional Studies, Major, an associate minister at Central Baptist Church, asked his fellow graduates and their families to open their hearts to God with him and that they join him in the Our Father.

Major thanked God for instilling in him and his fellow new alumni the "discipline, the determination, and the steadfastness to finish this race."

Following Major's prayer, those assembled filled the arena with cheers as confetti flew and the band struck of "When the Saints Go Marching In!" 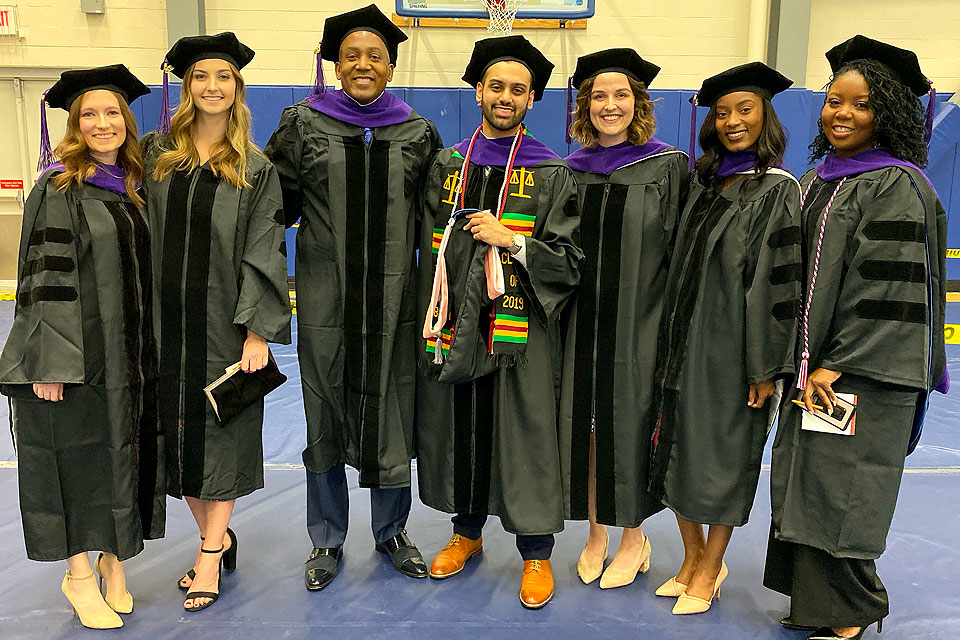 New graduates from the School of Law gather in the practice gym prior to mid-year commencement on Friday, Dec. 13. Photo by Stephanie Mueller