Two second-year medical students received plaudits for their dedication to helping minority medical students thrive at Saint Louis University at a special gathering where they were awarded scholarships to support their education.

Maya Hines and April Lewis were awarded the John Berry Meachum and Mound City Medical Forum scholarships, respectively, on Wednesday, Dec. 15, at the Saint Louis University School of Medicine’s Office of Diversity, Equity and Inclusion. The grants were worth $1,500 and $2,500. 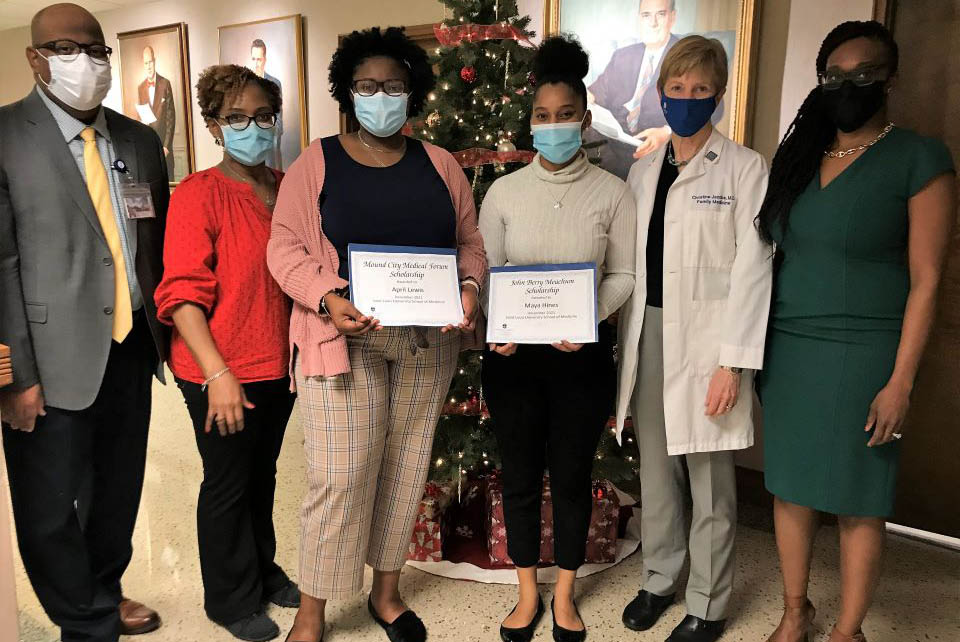 Hines and Lewis were selected for their leadership — both inside the classroom and within the SLU community.

“We’re grateful for the recognition,” Hines said. “It’s a chance to shine and show what the School of Medicine is all about.”

Daniel Blash, Ph.D., vice dean of diversity, equity and inclusion​ and chief diversity officer at SLU’s School of Medicine​, said it was an opportunity to pay it forward.

“They have done a phenomenal job as chapter co-leads of the Student National Medical Association (SNMA) and have been at the forefront of programs that have put our students in the community,” Blash said. “They have also held the institution accountable toward its students.”

The SLU School of Medicine SNMA Chapter supports the recruitment and retention of current and future underrepresented minority medical students. Its goal is to increase the number of clinically excellent, culturally competent, and socially conscious physicians. Hines and Lewis served as executive board members for the 2020-21 academic year.

“We come from underrepresented communities,” Lewis said. “It’s important to have minority representation at the School of Medicine. We wanted to ensure we did everything that we could to get underrepresented students here, keep them in school and ensure they graduate.” 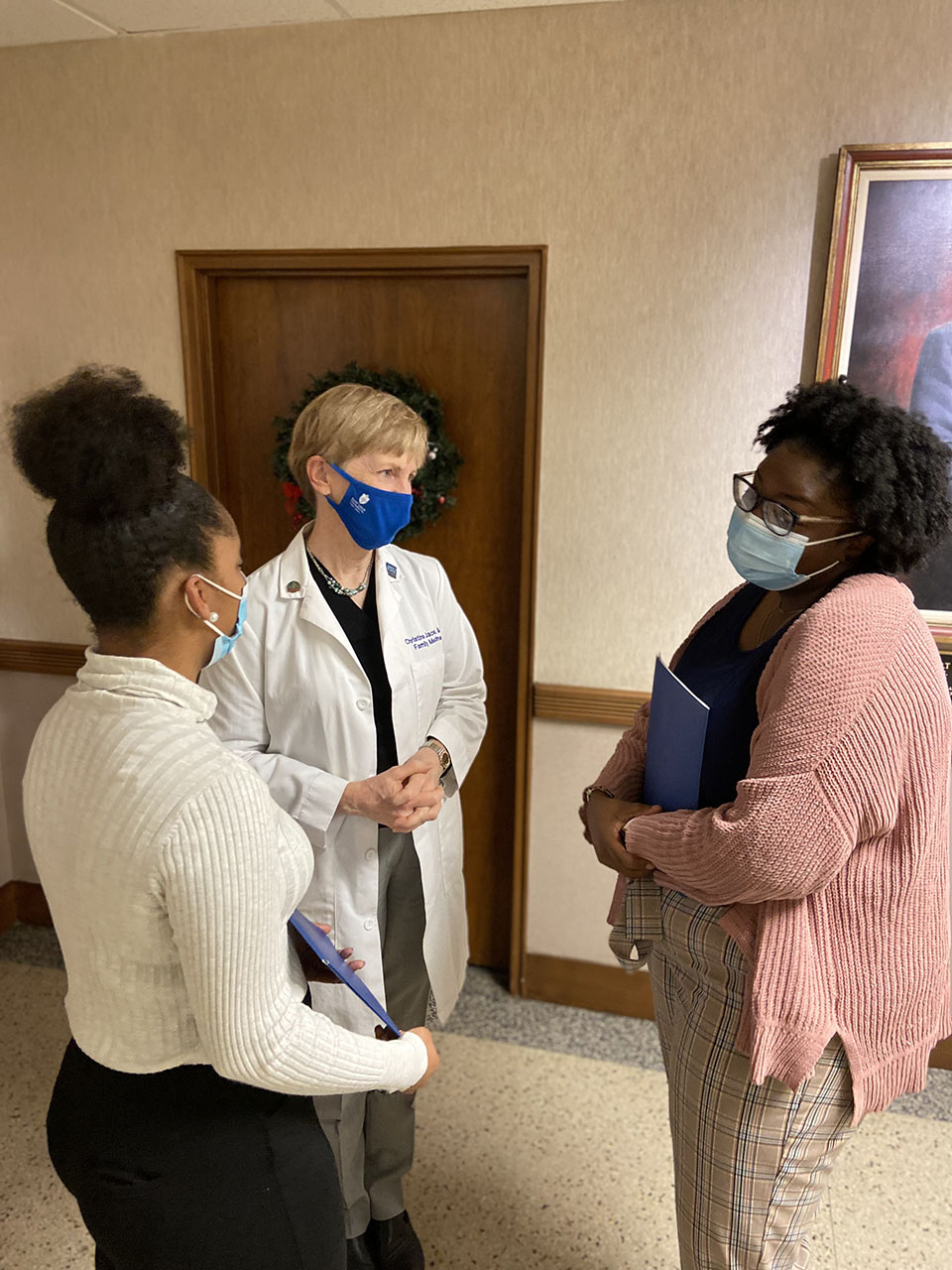 The chapter also addresses the health needs of underserved communities. On December 1, the chapter hosted a World Aids Day seminar in partnership with Vivent Health, a nationally recognized leader in the fight against HIV/AIDS. The seminar was open to the entire student body and focused on the importance of screening, prevention, and the impact HIV/AIDS has had on the health care field. The chapter also hosted a donation drive in November that benefitted Rooms at the Inn, which provides immediate, temporary shelter to homeless women and families in the St. Louis region.

Denise Hooks-Anderson, M.D., interim assistant dean of diversity, equity and inclusion and associate professor in family and community medicine, serves as a faculty sponsor of SLU’s SNMA Chapter. Hooks-Anderson presented the Mound City Medical Forum (MCMF) Scholarship. MCMF is a nonprofit organization of which Hooks-Anderson served as past president. ​MCMF is the MO state society of the National Medical Association representing minority physicians and health professionals in the St. Louis Metropolitan area.

Katrina Thompson Moore, Ph.D., associate professor and undergraduate director  in SLU’s Departments of History and African American Studies, presented the John Berry Meachum Scholarship. She established the scholarship fund with her husband, SLU alumnus Duane Moore, M.D., in 2019. Moore graduated from the School of Medicine in 2002 and from the College for Public Health and Social Justice’s Master of Health Administration (MHA) program in 2014. He is a SLUCare pediatric emergency medicine physician at SSM Health Cardinal Glennon Children’s Hospital.

“We are a SLU family,” Thompson Moore said. “His mother was one of the few Black nursing students at SLU in the ‘70s. His sister obtained her law degree at SLU. That’s why we give back!”

The John Berry Meachum scholarship honors the achievements of a pioneering African-American leader. Meachum dedicated much of his life to developing and supporting educational opportunities for Black people in St. Louis. Like Meachum, Thompson Moore, her husband, and Hooks-Anderson are advocates for education.

“At SLU, we say 'Men and Women for Others' and our family truly believes in this principle,” Thompson Moore said. “We need more Black and Brown doctors. That’s why we’ll continue to help as much as we can.”

Both scholarships help medical students who hail from economically or educationally disadvantaged backgrounds. The scholarship funds are administered by the SLU School of Medicine's Office of Diversity, Equity and Inclusion.