Saint Louis University legend Dame Mary Bruemmer responds to well wishers with a big thank you after the SLU community showered her with birthday cards on the occasion of her 101st birthday Feb. 26. 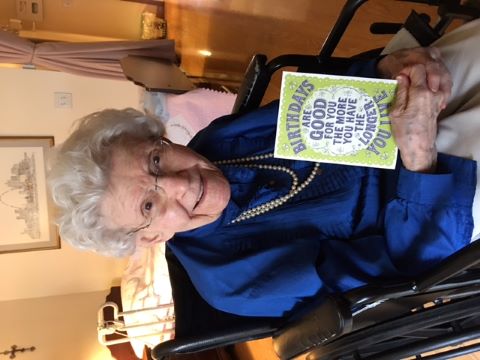 Well wishers were invited to share a birthday card or message with Bruemmer for her birthday. Breummer received the cards from her SLU family and responded back with a note of her own.

“Thank you for remembering my 101st birthday in such a magnanimous way: flowers, cards, letters and your family photos. I am ever so grateful for the memories you brought back to me. I was especially surprised and pleased with the abundance of loving notes from members of the Women’s Athletic Departments and their leadership.

This birthday celebration was an especially happy one, but nothing can compare to my 100th celebration with my SLU family last year!”

Setting foot on campus in 1938 as a freshman, Bruemmer went on to become one of the first women leaders in St. Louis higher education, a Vatican dame and a storied figure in University history.

In her 64 years at SLU, Bruemmer impacted every facet of life on campus – from overseeing dining hall menus to advocating for women on campus to serving as a goodwill ambassador to alumni and friends of the University.

The Legend of Mary Bruemmer

Bruemmer officially retired from the University in 1990. She continued to “volunteer” until 2011, working with various University organizations including the Alumni Office, Alpha Sigma Nu, the Women’s Council, and the Women’s Commission, often serving as a “goodwill ambassador.”

In 2016, Bruemmer was named a Dame Commander of the Order of Saint Sylvester, Pope and Martyr.