In honor of Black History Month, Saint Louis University reflects on the Clock Tower Accords, which have brought long-lasting cultural and structural changes to SLU.

Shortly before Smith's passing, he and Amber Johnson, Ph.D., (A&S ’01, Grad A&S ’02), collaborated to envision new ways to bolster the efforts of the office, resulting in a new Associate Provost position. Johnson now serves as the interim vice president of DICE and pledges to uphold and realize Smith's legacy and vision.

DICE formally launched during the 2021 Occupy SLU Week, Oct. 8-15. Occupy SLU was a peaceful occupation at the campus clock tower across six days in October 2014, following the officer-involved shootings of two African American young men: Michael Brown Jr. in Ferguson, Missouri, and VonDerrit Myers Jr., the son of a long-time staff member, VonDerrit Myers Sr., in the nearby Shaw neighborhood of St. Louis. 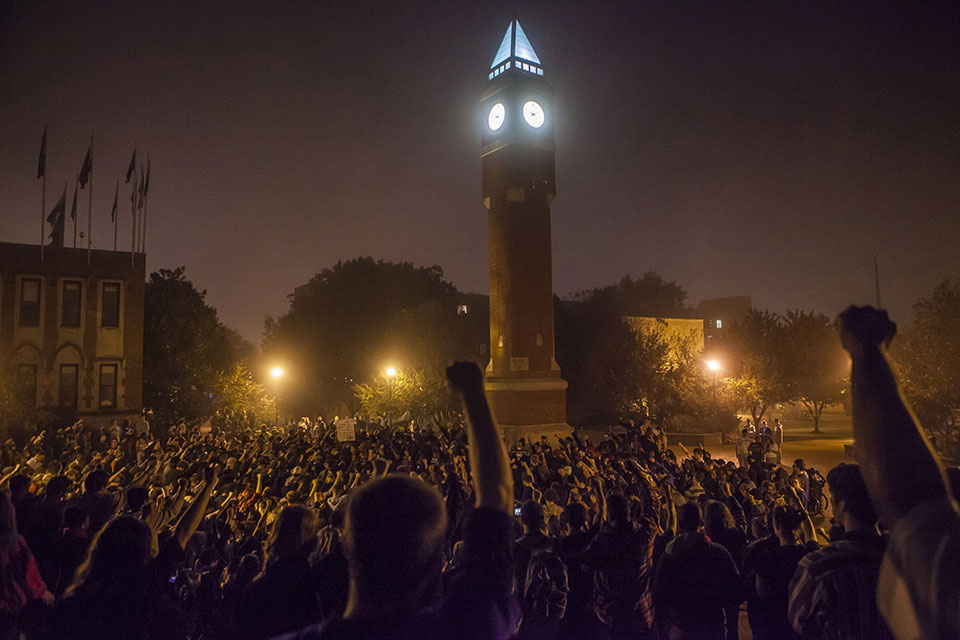 Occupy SLU ended with the adoption of the Clock Tower Accords, a 13-point agreement reaffirming the University’s Jesuit values and its formal commitment to diversity, equity and inclusion (DEI).

Below are key highlights from the agreement the University has implemented:

In the fall of the 2021-2022 academic year, SLU became the fourth Jesuit university in the nation to formally establish a Department of African American Studies. Christopher Tinson, Ph.D., who previously served as program director, became the department’s first chair.

SLU has made intentional efforts to attract, retain and support African American student populations. Since 2014, more African American high school graduates have enrolled at SLU. For the 2021-2022 academic year, SLU enrolled the second largest and most diverse freshman class in history. More than 22% of new freshmen were students of color, a 5% increase from 2019. First-generation college students comprised 25% of incoming students, an 8% increase from 2019.

Staff from DICE, Student Development, and the Office of Enrollment and Retention Management are working together to help remedy the myriad challenges that could stress individual African American students and lead to their withdrawal from school.

This includes creating the Billikens’ First Chapter, hiring two new staff members specializing in recruitment, retention, and leadership development as special assistants to the vice president of DICE, and establishing equity and wellness programs designed to promote human flourishing for SLU’s most marginalized and vulnerable students.

“We still have more work ahead of us that requires imagination and dedication to ensure we repair past harm and prevent its occurrence in the future,” Johnson added.