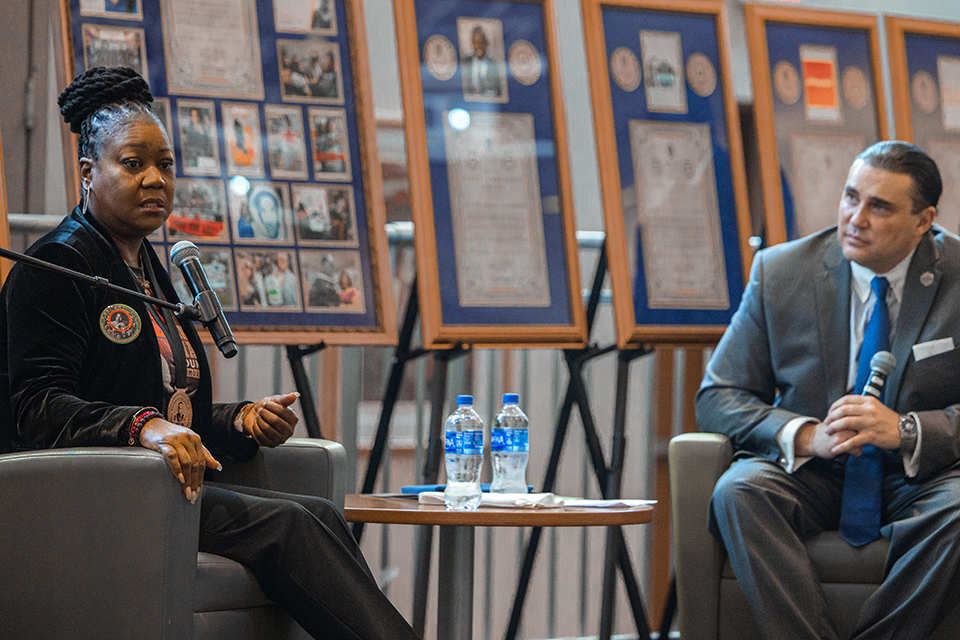 In his opening remarks, SLU alumnus Michael McMillan, president and CEO of the Urban League, acknowledged Rochelle D. Smith, M.S., in her new role as vice president for diversity and innovative community engagement. McMillan lauded her efforts in continuing the legacy of her late husband, Jonathan Smith, Ph.D., who he said strived to make SLU a leader in diversity, equity and inclusion.

Dr. King understood the challenges of national and institutional change yet believed it was absolutely required. Change is possible as long as we work as a community and from a place of love, Pestello continued.

“Dr. King believed that when we are inspired by love we have the potential to create a truly just society, a beloved community in which all people can thrive,” Pestello added. "Hope drives us to broaden access to education, health care, and work against the many impacts of racism."

Smith pledged that SLU will continue to be “bold, innovative and determined to uplift those who have been historically marginalized by systems of oppression and exclusion.”

The event featured a fireside chat with speaker Sybrina Fulton who is dedicating her life to transforming family tragedy into social change. Fulton was honored with the Drum Major for Justice Award at the event.

Since the death of her 17-year-old son, Trayvon Martin, during a violent confrontation in 2012, Fulton has become a champion for justice and an end to senseless gun violence through the creation of the Trayvon Martin Foundation.

“The justice system was not fair for us in our situation,” Fulton said. “I didn't understand how the jurors [couldn’t comprehend] that he was an unarmed 17-year-old that was minding his own business, and the person that shot and killed him had no right to follow and pursue him with a loaded gun.”

Trayvon’s foreshortened life gave rise to a movement that awoke a nation’s conscience.

Regarding where we go from here, Fulton called for more jurors of color.

The breakfast tribute has become a SLU and Urban League tradition, drawing local leaders, advocates, students and members of the wider St. Louis community together. In its 10 years, the MLK tribute has also attracted distinguished speakers. In 2020, noted journalist and author Roland Martin, gave the event's keynote address, while in prior years, those gathered heard from civil rights legends like Martin Luther King III and Ambassador Andrew Young.

Pestello, McMillan and Smith presented the year's awards to an esteemed group of accomplished academic, civic, business and political leaders.