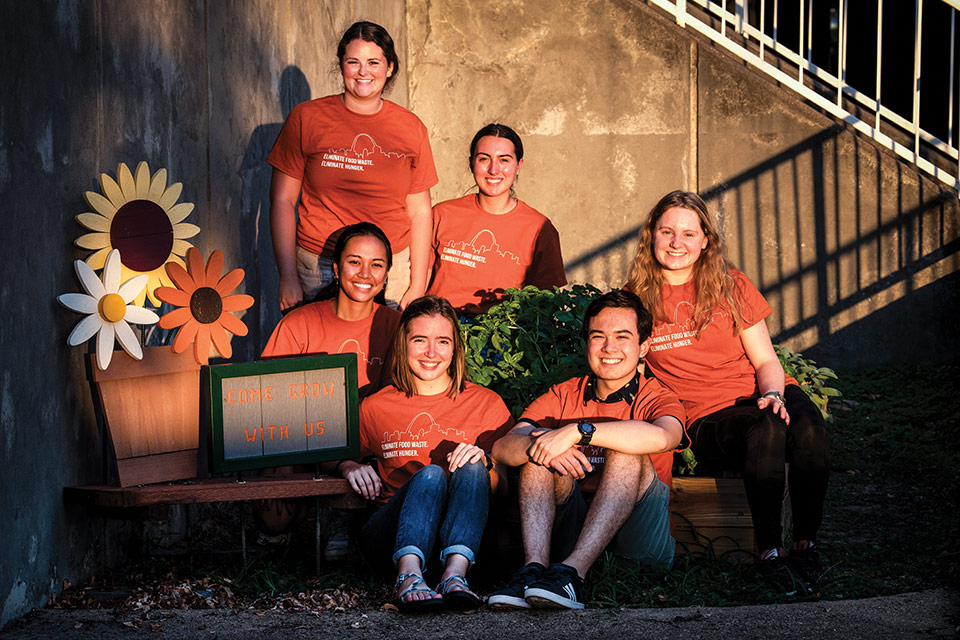 The 1818 Community Engagement Grant Program has only been around since 2018, but it is already making a big impact. The program, which was launched during Saint Louis University’s bicentennial celebration, annually awards 18 grants of up to $1,000 each to groups of SLU students and faculty, in partnership with a local nonprofit, to make long-term, sustainable impacts in the St. Louis community. To date, more than 1,000 students and faculty have partnered with nearly 100 nonprofit organizations to assist nearly 5,150 people.

In response to the COVID-19 pandemic, the 2019-20 grant cycle saw an almost 50% increase in the number of SLU participants in the program. Several projects focused on partnerships to expand relief efforts. While scaled back slightly, the projects had no less of an impact during the 2020-21 grant cycle, said Dr. Bobby Wassel (Grad Ed ’09, ’17), assistant director of SLU’s Center for Social Action.

“From setting up virtual visits with residents of a local residential care facility to developing an informational booklet as part of the First Period Project, this year’s grants impacted over 3,000 people — more than the previous two years’ worth of grants combined,” Wassel said.

The following projects represent just a handful of initiatives that received grants and demonstrate how servant leaders at SLU met significant needs in the community during an unprecedented time. 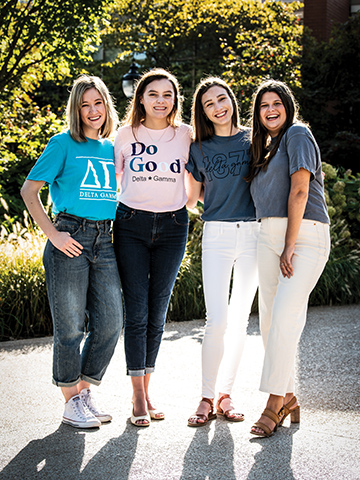 The pandemic exacerbated feelings of social isolation and mental illness, particularly among older adults in residential care and skilled nursing facilities. With a goal to bring joy and companionship to those in need, sorority members of the Eta-Theta chapter of Delta Gamma at SLU reconnected with a community partner. Since 2019, sorority members have volunteered at the Mary Ryder Home, a St. Louis residential care facility that serves low-income women age 55 and over. Many of these women have a disability or mental illness and were especially affected when mandatory lockdowns canceled or limited in-person gatherings.

“Over half of the residents didn’t have any contact with their families,” said Abigail Simon (DCHS ’21), a first-year grad student at Doisy College of Health Sciences who led the Delta Gamma Connections project. “These are the people who were hit the hardest during the pandemic because they would see others getting calls and they weren’t.”

With grant funds, sorority members purchased nine Facebook Portals, devices similar to iPads, that allow video chats via Facebook Messenger and WhatsApp. They met with 20 residents for weekly virtual visits and measured their mental well-being over a few months. Sorority members found that the visits increased happiness and connectedness among residents and decreased depression and hospitalization.

“Getting to spend time with my partner on the video chats meant connection during a year of isolation,” Natalie Malloy, a member of Delta Gamma, said. “It’s been full of belly laughs and stories.”

Missouri saw an incredible increase in the number of Black families who chose to home-school their children when the pandemic began, according to the U.S. Census Bureau’s Household Pulse Survey. Dr. Dannielle Davis, professor of higher education at SLU’s School of Education and national consultant on home schooling, said that’s unlikely to change soon. 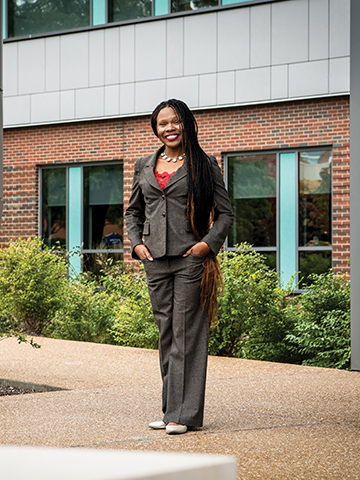 Davis is the founder and executive director of Circle of Excellence Network, an initiative that provides supplemental instruction for underrepresented youth in grades six to 12 with a focus on home-schooled students. The network offers parent-educator workshops and exposure to a rigorous curriculum in science, technology, engineering and math (STEM).

“Black and brown youth aren’t always encouraged to pursue STEM, and I see this initiative as a way to populate the pipeline,” Davis said. “Representation also matters, and it’s important that students see others who look like them.”

Davis leveraged technology to provide safe instruction for students in her Circle of Excellence Network during the pandemic. She launched the “Physics and Community Engagement: Promoting Social Justice with Science” project. The goal was to expose students from diverse backgrounds to physics, as well as to professionals of color in STEM and their historical contributions to the field.

The course topic “Physics of the Pharaohs” taught students fundamental concepts in physics. They also explored the discoveries made by Africans in the Nile Valley and discussed contemporary findings. Class highlights included an opportunity to virtually attend the National Society of Black Physicists annual conference.

The students received packages that included the book The Star of Deep Beginnings: The Genesis of African Science and Technology by Charles Finch III, as well as a PhysicsQuest 2020 science kit, which were donated by the American Physical Society. Students learned about the incredible life and work of NASA’s Katherine Johnson through four activities based on force and motion. Lessons and experiments included: How mass affects falling objects (both on Earth and the moon), changing variables to affect pendulum motion, projectile motion with desk-mounted slingshots, and circular motion and centripetal force by swinging and launching whiffle balls and string.

Davis said the students are now applying their knowledge of physics to address climate change.

A 2019 SLU study found that 21% of low-income women and girls surveyed in St. Louis lack menstrual hygiene supplies, a situation called period poverty. In one of the first needs assessments of its kind, Dr. Anne
Sebert Kuhlmann, associate professor of behavioral science and health education at SLU’s College for Public Health and Social Justice, and her team documented the challenges that low-income people with periods face in accessing basic sanitary supplies. 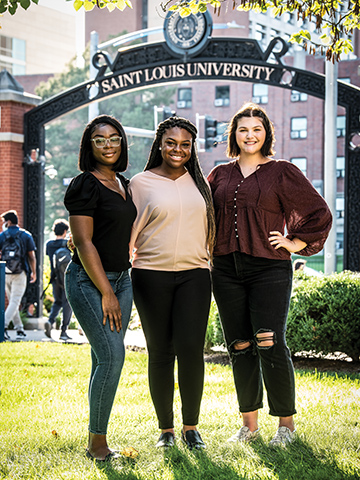 The pandemic intensified period poverty. People who previously received menstrual hygiene products in schools or public facilities found themselves without access to the products as those places closed due to mandatory shutdowns.

When a group of public health graduate students heard about period poverty and the demand in the area, they launched the Interactive First Period Kit Project. They teamed up with graphic designer Emma Johnson and co-authored a period booklet for first-time menstruators and their caregivers. The Go With the Flow booklets provide details about menstruation, peer advocacy, ways to reduce stigma and resources. The St. Louis Area Diaper Bank and its St. Louis Alliance for Period Supplies (SLAPS) program give the booklets to their partners, who distribute them to service providers and caregivers in first period supply kits.

Students who created the guide included Onyekachukwu Anikamadu, Gabriella Schmidt-Grimminger, Allie Pinson, Adrienne Beckett-Ansa and Jilliam Root. Together with SLAPS, they held local focus groups with menstruators ages 9 to 13 to gather data for the booklet. Respondents were asked a series of questions about the format of the booklet as well as questions about menstruation. The booklet incorporates an inclusive design and content that appeals to a broader audience.

“Even if you do not have a uterus, it is important to understand how a period affects others,” Anikamadu said. “Being an ally can help reduce stereotypes, boost support and provide peers a more comfortable environment during this confusing time.”

Road to a Greener SLU

Elyse Lewandowski, a senior in the Chaifetz School of Business, came up with the idea to create an urban farm on SLU’s campus.

Lewandowski was past president of Campus Kitchen, a student-led volunteer organization with a sustainability focus dedicated to fighting food insecurity for low-income residents in Midtown St. Louis.

The organization, which prepares and delivers healthy meals, wanted to expand upon its mission by partnering with about 40 students from SLU’s Health Sciences Learning Community to create three raised
garden beds behind Reinert Hall.

“It adds a fresh component to the foods we serve to our community partners,” Lewandowski said. “It’s nice to spice it up and make it a bit more appealing.”

Campus Kitchen uses the veggies and herbs in dishes they prepare, cook and deliver to Billiken Bounty, an on-campus food pantry for SLU students, and community partners. Lewandowski said about 400 meals per week are served through community partners, including Council Tower Senior Living Apartments Community, Midtown 300, Father Dempsey’s Charity and Our Lady’s Inn.

Campus Kitchen is more than food nourishment; it’s about relationship-building in the community, which was needed more than ever during the pandemic.

“As SLU students, we’re guests in the Midtown St. Louis community,” Lewandowski said. “It’s important that we respect the people who are already here and remain cognizant of the issues that impact their lives.”