SLU Legends and Lore: The Billiken

Rubbing his belly is said to bring good luck during exams. He may resemble a storied football coach. Whether he hails from Japan, Argentina, Alaska or somewhere closer to St. Louis, the Billiken has been SLU’s cherished mascot for just over a century. 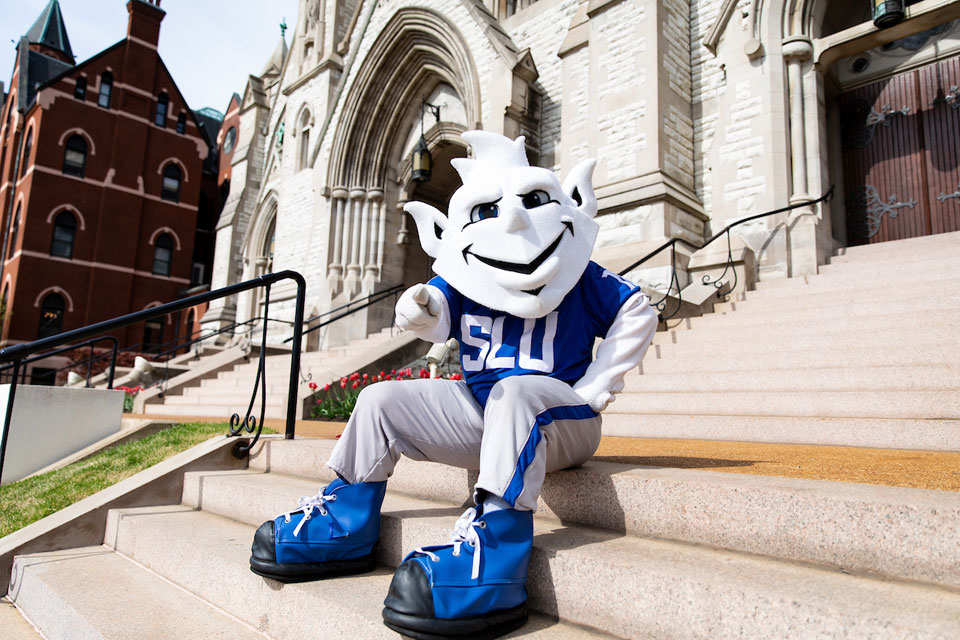 The Billiken’s origins are shrouded in mystery, but he's called Saint Louis University home for more than a century. Photo by Kelly Paladin

More than 100 years after his birth, the Billiken continues to make the SLU community proud of our unique mascot. He regularly appears at SLU athletic games.

He has also been known to send good wishes to his mascot friends Fredbird and Louie, cheering on the St. Louis Cardinals baseball team and the St. Louis Blues hockey team. The Billiken sent out good vibes to the Blues as they finished out a Cinderella season by bringing home St. Louis’s first Stanley Cup Championship in 2019. 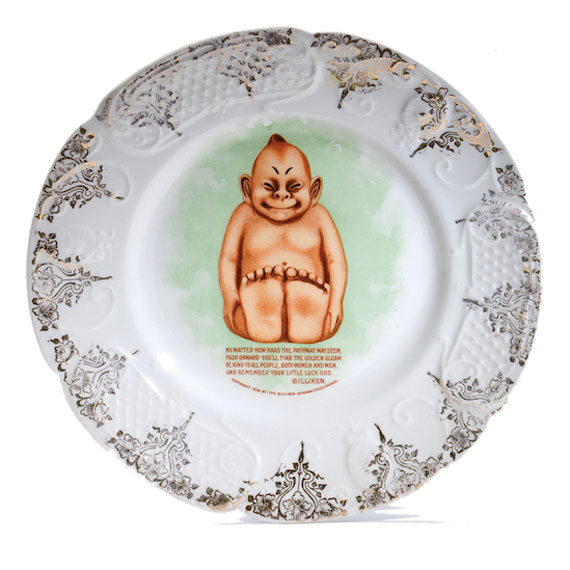 The Billiken’s luck was strong in 2019. Earlier in the year, he cheered the SLU men’s basketball team on to victory during its Atlantic 10 tournament championship and subsequent trip to the NCAA tournament.

The Billiken also showed off his own athletic prowess, beating out other mascots from around the country during The Tonight Show with Jimmy Fallon’s 2019 March Madness basketball skills contests. (SLU’s Billiken can not only dunk, but he can also land a beautiful three-point shot when called upon.)

The Billiken’s origins are shrouded in mystery. Most stories situate the Billiken as a divine figure in religious traditions from around the globe.

Tales of the Billiken

The Billiken was inspired by a Chinese god of good fortune.

But here at SLU, we believe Saint Louis University’s Billiken was born a bit closer to home, just across the state in Kansas City. On Oct. 6, 1908, illustrator Florence Pretz received a patent for her “ornamental design form,” one titled “Billiken.” 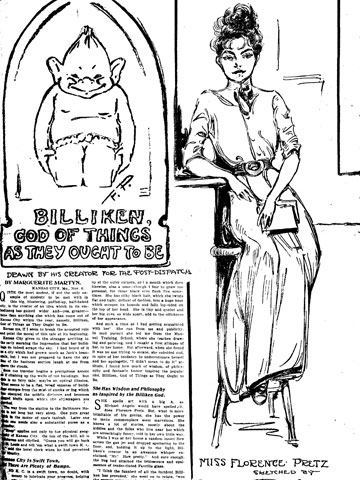 The 21 year-old Pretz was an aspiring artist teaching at Kansas City’s Manual Training School. Her Billiken creation was inspired by The Rubaiyat of Omar Khayyam, an ancient poem. The Persian poem touched her deeply and she was driven to “make an image which embodied hope and happiness to sort of live up to,” or her “god of things as they ought to be.” Pretz took her creation’s name from another poem by Canadian poet Bliss Carman.

“Billiken just happened,” she said in interviews, “just had to happen, you know.”

Following his 1908 debut, the Billiken became a national fad. Dolls, postcards, plates, belt buckles, salt and pepper shakers, and other memorabilia featured him. Some of this “Billibilia” is waiting to welcome visitors to SLU’s Office of Admission in DuBourg Hall. The University also has its own “Billiken Rag” for those eager to get out on the dance floor.

SLU had athletic teams for years before Pretz’s Billiken was created, and SLU sponsored a football team as early as 1886.

However, early SLU teams did not really have a mascot – they were simply known as the “Blue and White,” after the school’s colors. Associating a mascot with a sports team dates to around the same time when the newly-created American baseball teams began taking on a mascot as a good luck charm. 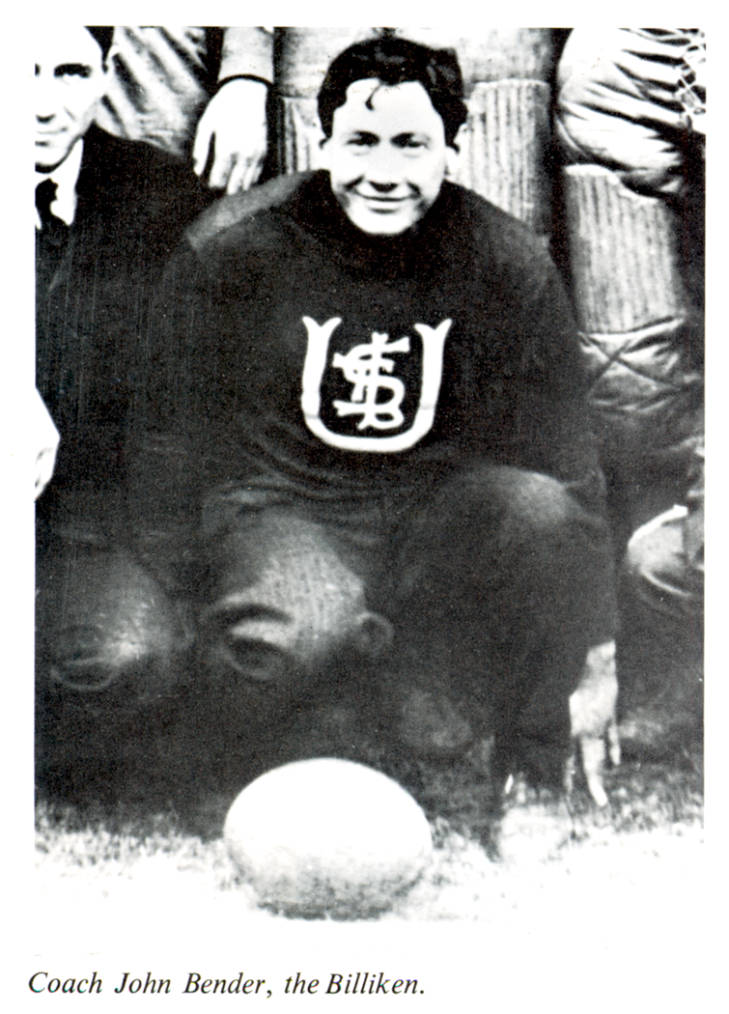 By the beginning of the 20th century, many American college sports teams had also taken on mascots. As the century progressed, these mascots often took on mythic pasts and students created their own traditions, rituals and artistic tributes to their favorite campus good luck charms.

While the Billiken craze was short lived nationally, SLU’s football team was building a formidable legacy on the field.

Both the 1904 and 1906 teams compiled perfect 11-win seasons. During the first game of the 1906 season, Saint Louis University became the first team to throw a forward pass during an intercollegiate game.

During the 1910 and 1911 seasons, former collegiate star player John Bender,  who had come to SLU to study at its School of Law, coached SLU’s football players. At some point during these two seasons, fans began associating the Billiken with SLU’s football team due to the uncanny resemblance between the Billiken and Bender. 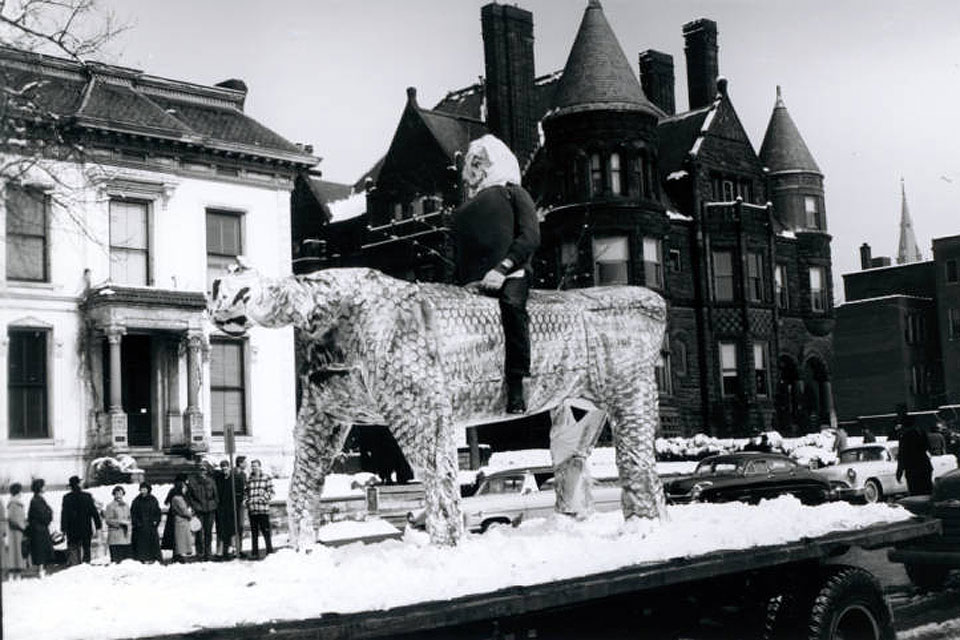 Most stories agree that a SLU law student, Charles McNamara, drew a cartoon picture portraying Coach Bender as a Billiken. He placed the cartoon in the window of a drugstore near the corner of Grand Boulevard and Laclede Avenue. As soon as people saw McNamara’s picture, they began to call the football team “Bender’s Billikens.”

SLU had found its mascot and St. Louis Post-Dispatch sportswriter Billy O’Connor made it official when he referred to the “Billikens” in print.

Let the Billiken Bring You Luck

Just as he does for all Billikens, the Billiken is here to provide a little extra good luck to all who believe in him. Visit the “Golden Billiken” seated in front of Chaifetz Arena and be sure to rub his belly before exams, major life decisions or any time you need a little help with making life the way it ought to be, for yourself and others. 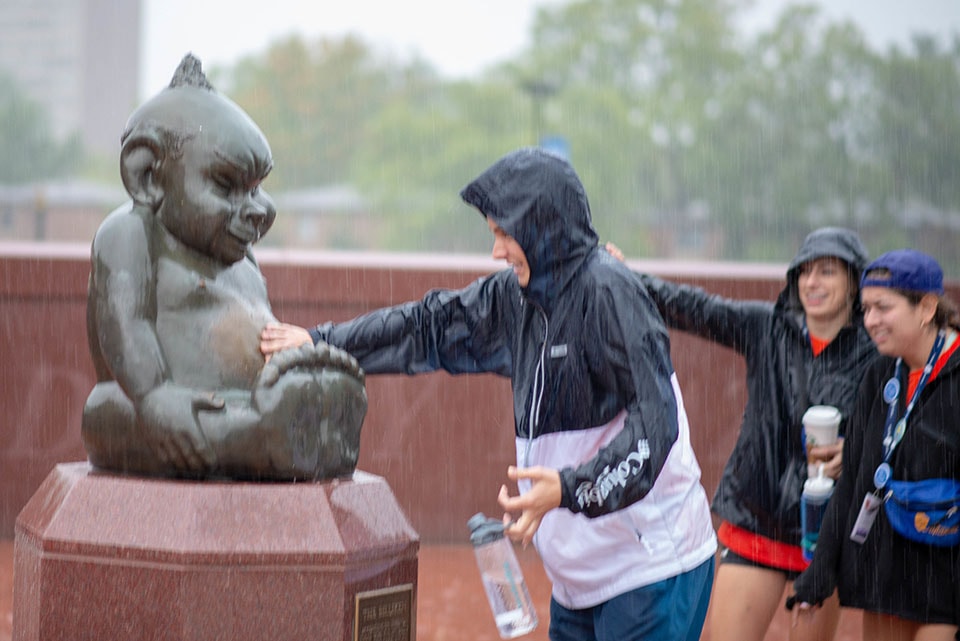 Need a bit of luck? SLU's Billiken is here to help. SLU photo