This is the first message in a new series intended to recap each meeting of the Board of Trustees, which meets four times each year: September, December, February and May.

These 41 trustees, which includes five Jesuits, provide oversight and give their time and talent because they are devoted to this institution. 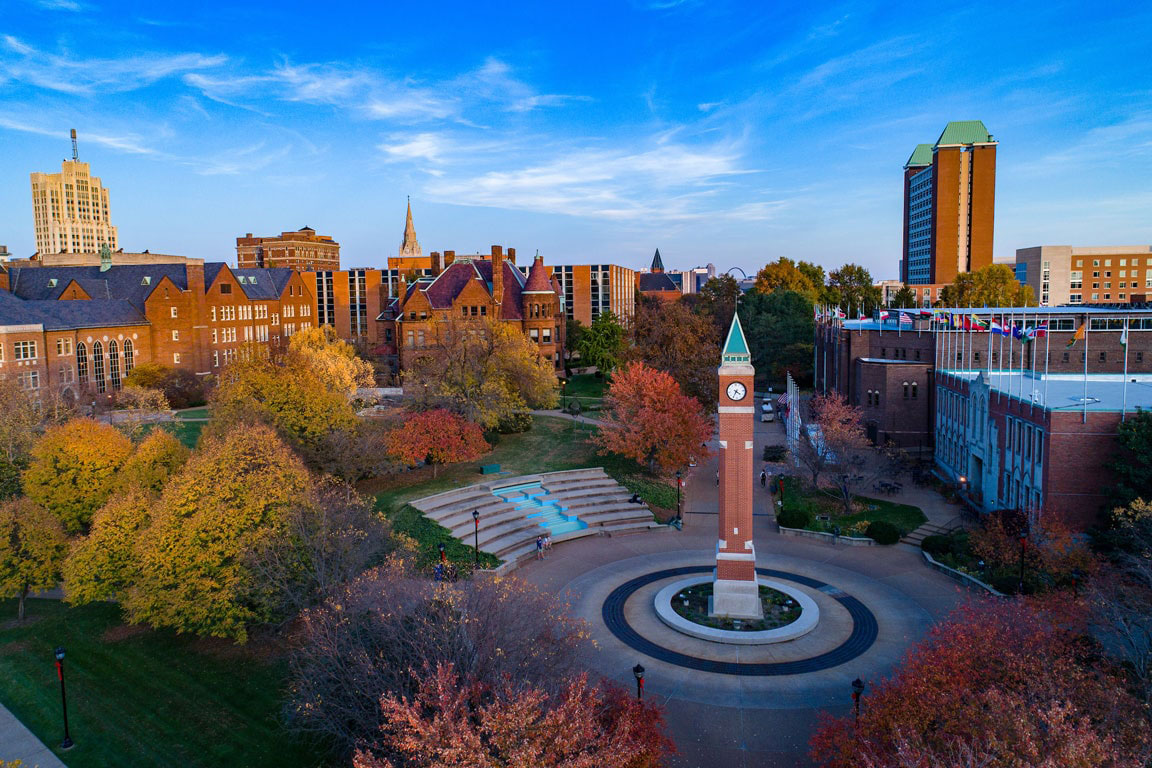 An aerial view of the Clock Tower and campus of Saint Louis University. SLU photo

As a reminder, faculty, staff and student representatives serve on most of the Board committees who are asked to report information back out to their respective constituent groups. Board Chair Joe Conran has attended several Faculty Senate meetings during this time as chair.

The meeting began with remembrance and prayer following the passing of Trustee Peter Benoist, who died Feb. 26 after battling an illness for many months. Benoist had been energetic in his engagement as a trustee, especially in finance and academic affairs.

With Conran’s chair term ending this year, Benoist’s fellow trustees elected him to be the next chairman of the board last fall, slated to begin in FY21. Peter was a wonderful man and a great trustee. The University will miss him greatly.

Due to the passing of trustee Benoist, the Board voted unanimously to extend chairman Conran’s term for an additional year, through FY21 when the Board will conduct a process to identify its next chair. Trustee Bo Mehan will serve as vice chair beginning in FY21, replacing our long-serving vice chair, Patrick Sly.

Near the beginning of each Board meeting, the president is invited to provide updates in a report to the trustees. University President Fred P. Pestello, Ph.D.’s report last Friday included:

Former National Geospatial-Intelligence Director Robert Cardillo presented on the future of the NGA in St. Louis and how SLU can grow its already strong relationship with the NGA. The University previously named Cardillo as a Distinguished Geospatial Fellow within the SLU Research Institute.

The NGA will need skilled employees, not just in STEM-related fields, but in all fields, according to Cardillo. During a question and answer discussion with the Board, he underscored SLU’s efforts to becoming a preeminent university in geospatial research and education, and how beneficial that will be for the NGA moving forward.

Robert Wilmott, M.D., dean of the School of Medicine and CEO of SLUCare, shared updates on the ongoing construction and logistics around the new SSM Health Saint Louis University Hospital and the SLUCare Center for Specialized Medicine (formerly called the ACC). Renovations to the SLUCare Physician Pavilion (formerly the Imagine School Building) are nearly complete.

The Pavilion will be home to physician’s academic offices. The Board was impressed with the ongoing progress SLUCare has made in transforming its financial performance.

Interim Provost Chester "Chet" Gillis, Ph.D., provided updates on several University academic initiatives, including the searches for deans of the College of Arts and Sciences and the Richard A. Chaifetz School of Business.

Gillis announced that Danny Willis, DNS, R.N., FAAN, has been appointed as the next dean of the Trudy Busch Valentine School of Nursing. Willis will join the University on July 1, 2020.

The meeting concluded with a presentation from senior Andrew Wagner, of Parks College of Engineering, Aviation and Technology, who was one of a team of Parks’ students and faculty who successfully built a small satellite – Argus-02 – which was launched to the International Space Station and from there was sent into orbit around the earth.

The tissue box-sized satellite will study the impact of space and radiation on the SanDisk card, among other things. Humorously, the team also programmed the satellite to send out a signal every 30 seconds that says, “God Bless, Go Bills.”