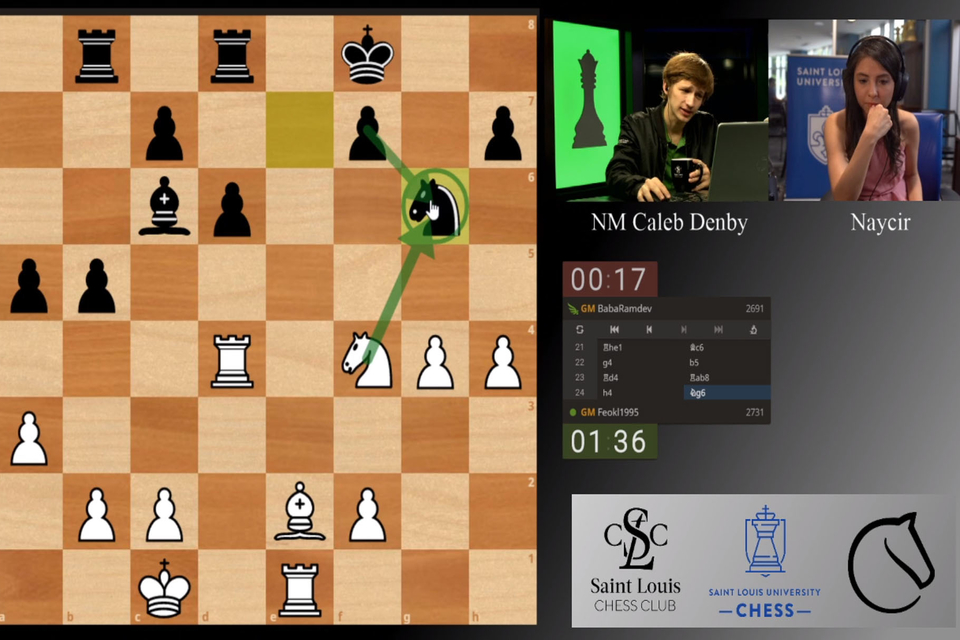 Caleb Denby (left) and SLU’s Nigarhan “Naycir” Gurpinar (right), a student in the College of Arts and Sciences who is a fixture in the world of chess, provide virtual commentary on play at this year’s National Collegiate Rapid and Blitz Championships. Submitted photo

Originally scheduled to host the tourney earlier this year in March, SLU’s chess players took to a virtual board to match wits and moves with players from around the country. More than 150 students participated in both sections of the tournament, representing more than 25 different colleges and universities.

“Chess players are used to overcoming hardships and challenges, and this was of course no exception,” Alejandro Ramirez, chess team coach, said. “Despite the increased popularity of chess online, organizing an event with the gravitas of a national championship on the internet was no easy feat. With an incredible amount of willpower and the cooperation of many different parties, the tournament was finally held this last weekend, a tournament that was incredibly successful.”

Titles up for grabs during the two-day tournament included team and individual championships and other honors.

Get More Details About All the Winners

“Both tournaments were absolute nail-biters,” Ramirez said. “The top colleges showed up in full force, and the strength of the tournament was truly jaw-dropping.”

In the Rapid section, SLU’s Benjamin Bok, Nikolaos Theodorou, Dariusz Swiercz and Akshat Chandra finished the tournament by defeating opponents from the University of Missouri-Columbia, Webster University and the University of Texas at Dallas to take home a decisive victory to become National Team Rapid Champions.

A Billiken also claimed the championship crown in the U.S. Women's Rapid Champion section. Sophomore Stavroula Tsolakidou, currently the #1 player for her native Greece, proved to be the best female player of the day in what Ramirez called a “topsy-turvy event for her.”

More About How the Tournament Went Virtual From Coach Ramirez

How did you adapt the tournament to an online platform?

As the chief organizer, it was my duty to determine how this tournament would be played. After exploring many different alternatives on how to host the event, the best solution that was found was inspired by the Charlotte Chess Association's series of tournaments which were hosted on lichess.org, but with pairings done by SwissSys and overlooked by a tournament director.

The pairings were sent to a third-party website (collegiate.chess.stream) where the players just needed to click on their link to start their games. It really felt like finding your board and sitting down in a real tournament. This allowed us to avoid an important problem: players of the same university must not be paired against each other!

Thankfully, thanks to the efforts of Grant Oen, tournament director, and of Chacha Nugroho, the event’s webmaster, we were able to set up the tournament in exactly the way we wanted it. The tournament simply would not have been possible without them.

The event could be followed live on the Saint Louis Chess Club's twitch channel and the can be replayed from there. The commentary was done by Caleb Denby and SLU’s Nigarhan “Naycir” Gurpinar, a student in the College of Arts and Sciences who is a fixture in the world of chess.

How did the tournament’s format differ from traditional play?

The tournament was held in two days. The first day was a nine-round Swiss 10+5 tournament, faster than the originally intended 25+5 event. We felt that moving the tournament online made it friendlier to quicker controls, while 25+5, a normal OTB rapid time control, felt like it would drag in an online event. It also allowed us to add two more rounds to the event, changing it from 7 to 9, which would produce fewer people tied for first at the end of the event.

The blitz portion was played the second day and remained unchanged at a 3+2 time control. Since the tournament was online and results could be harvested automatically, the wait time between rounds was reduced to virtually nothing. This allowed us, again, to add rounds; the tournament was a 13 rounder. A marathon over the board, but manageable online.

What was your biggest takeaway?

When organizing a tournament with so many different components, and having to switch the format to online, it was easy to foresee how many things could go wrong. Through the hard work and effort of the many people involved in the tournament, things went very smoothly.