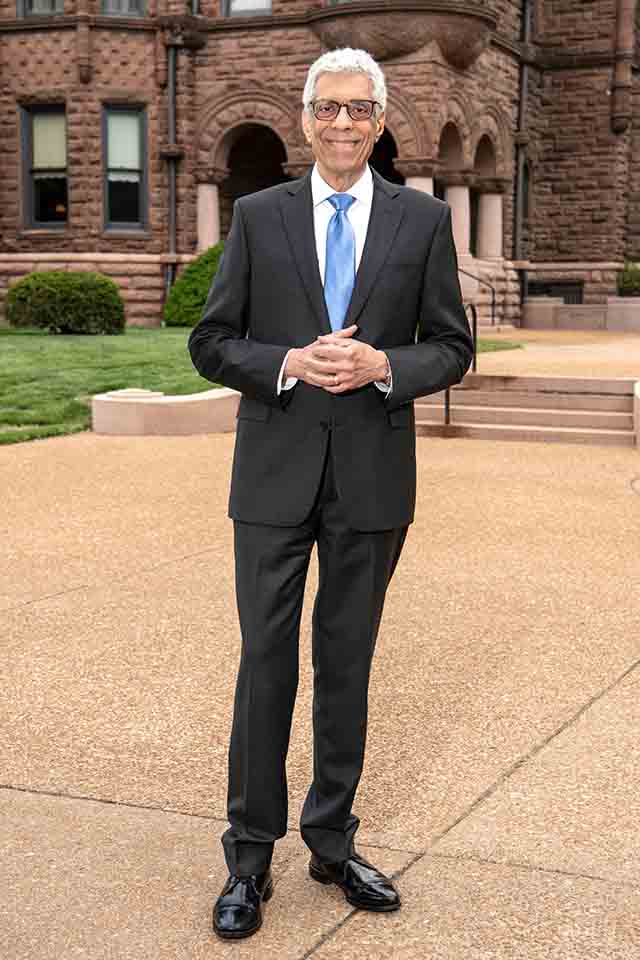 As president, Dr. Pestello oversees one of the nation’s leading Jesuit research universities with nearly 13,000 students, more than 7,000 employees, an annual operating budget of more than $1 billion and an endowment of over $1.5 billion.

Dr. Pestello has galvanized the University community around a compelling vision: To be a global Jesuit university that is mission-focused, student and patient-centered, and research-driven – one that is working with the people of St. Louis to reimagine, transform and unify our city.

In pursuit of this vision, SLU has:

Dr. Pestello has also led SLU to become a driving force in the revitalization of midtown St. Louis. The University joined with SSM Health to create a 353 Redevelopment Plan and the St. Louis Midtown Redevelopment Corporation (STLMRC). The STLMRC has catalyzed several completed development projects, including the City Foundry, a new Fresh Thyme Market grocery store, the Steelcote Lofts, and the Element Hotel by Westin. Renovation of the historic Armory is well underway, and construction has begun on a Target store set to open in summer 2023.

Belief in the University vision has taken root among benefactors as well, inspiring historic levels of giving. Dr. Pestello is leading SLU’s $500 million “Accelerating Excellence” campaign, the largest campaign in SLU history. The University has seen multiple giving records throughout the campaign, including its best fundraising years and largest gift to date. As the campaign closes in on its final weeks, its long list of achievements will only grow.

Continuing the Jesuit Tradition of Excellence

As a graduate of a Jesuit University himself, Dr. Pestello understands firsthand the promise of an education guided by the Society of Jesus and its rigorous, justice-oriented, educational mission.

Dr. Pestello is the first of only two people who have been appointed as the first lay president of two U.S. Jesuit institutions. He joined SLU after serving six years as president of Le Moyne College, where he achieved record-breaking levels of enrollment, fundraising, endowment and campus construction. Prior to that appointment, Dr. Pestello was faculty member, department chair, associate dean and provost and senior vice president for educational affairs during his 25-year career at the University of Dayton.

Dr. Pestello earned his bachelor’s degree at John Carroll University, from which he was awarded an Alumni Medal in 2018. He completed his graduate work in sociology at the University of Akron.