Saint Louis University is a top U.S. university, attracting hundreds of undergraduate and graduate international students from more than 80 countries around the world. With a legacy of innovative academics and research, SLU is home to a diverse community of students receiving a transformative education.

Step One: Complete an online application.

The online application will ask about your educational background and citizenship to help determine your eligibility. If you are applying to enter SLU as a first-time, freshman student, we’ll also ask you to complete an essay. There is no application fee to apply for undergraduate admission to SLU.

Applying as a graduate student? Learn how here.

Find out from your admission counselor what secondary credentials are required. We’ll evaluate how you’ve done in school up to this point, so please send all transcripts for secondary work, along with their English language translations.

These are scores from any standardized test you may have taken to prepare for college — TOEFL, IELTS, PTE, SAT, ACT or Duolingo score. All of our international applicants are required to demonstrate their English proficiency, and these tests can help us make that determination.

If you do not meet SLU’s direct entry requirements, we encourage you to apply to the Pathway or English Language programs offered by INTO Saint Louis University.

Though not required for admission, submission of a resume of activities and letters of recommendation is encouraged. All undergraduate applicants are also encouraged to complete an admission interview.

Please note, while SLU requires proof of your ability to financially support your attendance, it does not impact your admission decision.

What Does SLU Offer International Students?
82

of SLU students come from outside the U.S.

Saint Louis University offers some of the best academic programs in the nation, including many competitive master's and doctoral options. In fact, many of SLU's programs were judged to be in the top 50 nationwide — including a top spot for our health law program — in recent U.S. News & World Report rankings.

INTO SLU provides instruction and pathway programs for international students who need additional English-language and academic preparation. Upon successful completion of the INTO SLU program, students gain full admission into one of SLU’s participating undergraduate or graduate programs.

Learn More About INTO SLU

Tour SLU From Wherever You Call Home

Saint Louis University's beautiful campus is waiting for you to explore.

Get to Know St. Louis 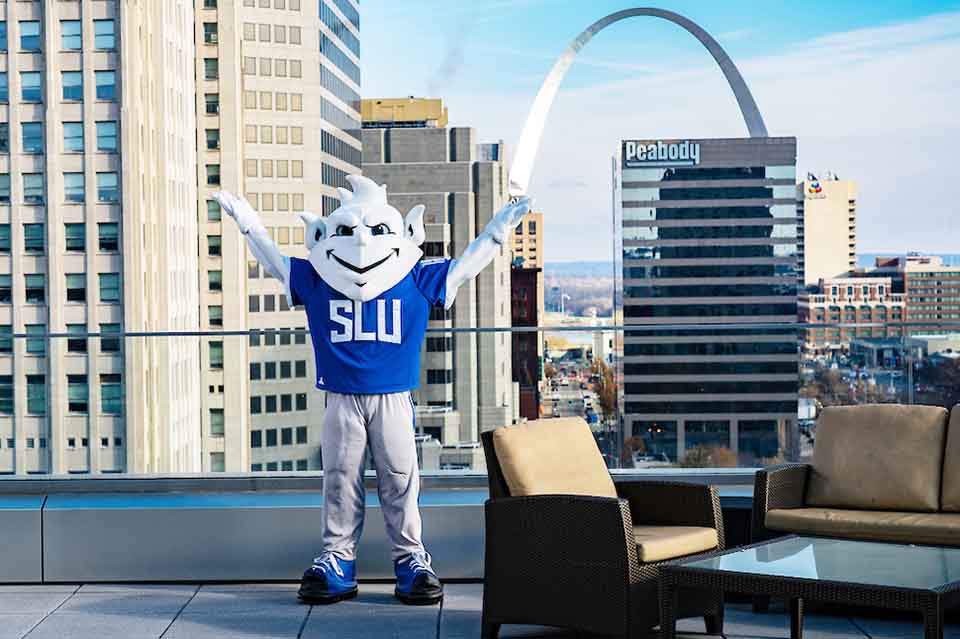 As the 21st largest metropolitan area in the United States, St. Louis has all the resources of a major international hub while also retaining the charm for which the American Midwest is famous. No matter what country they were born in, almost all of our students say that SLU — and St. Louis — feels like home.

SLU is located in Midtown St. Louis, which has always been known as a cultural center, with award-winning theater and music steps from campus. And just south of campus is a business district known for nearly every type of international cuisine.

A more than $1 billion investment in nearby development is also transforming SLU's neighborhood. To the west is a 200-acre innovation hub, Cortex. Shopping giants, including Ikea, offer everything students need within walking distance. And the new Prospect Yards district has brought entertainment options, a seven-story hotel, a greenway trail and more.

Curious to know more about Saint Louis University and all it has to offer? Read about our traditions and academic offerings in Arabic, Korean, Portuguese, Spanish, Thai or Vietnamese.